Dr. Michael Mickler to Speak on “Lessons Learned from Early Christianity for Unificationists” 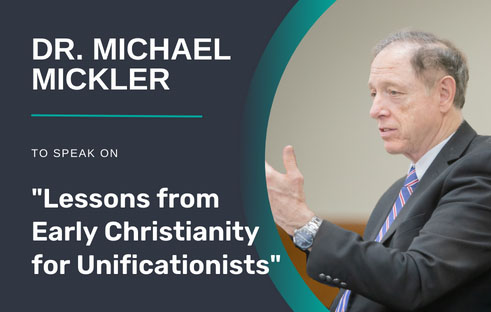 Dr. Michael Mickler, Distinguished Professor of Historical Studies at Unification Theological Seminary, will speak on “Lessons Learned from Early Christianity for Unificationists” as part of the Higher Purpose Forum (HPF) “Next Spiritual Awakening” series, which explores the Unification Movement in the context of U.S. providential history.

Dr. Mickler’s presentation will outline what the Unificationist community can learn from the story of the Early Christian Church, which began as an uneducated band of Galileans who briefly followed Jesus Christ to become the greatest spiritual movement in history. His presentation will identify five lessons from Christianity’s early experience relevant to challenges faced by Unificationists today.

Dr Mickler's new book, The Unification Church Movement, was only recently published by Cambridge University Press and is available for purchase on Amazon.

Since joining the faculty of Unification Theological Seminary in 1989, Dr. Mickler has served in a variety of administrative positions, including those of Academic Dean (1995-2000) and Vice-President (2000-2009, 2014-2022). He is an editorial board member of the Journal of Unification Studies. In 2022, Dr Mickler received the title of Distinguished Professor, the first and only faculty member with this distinction.