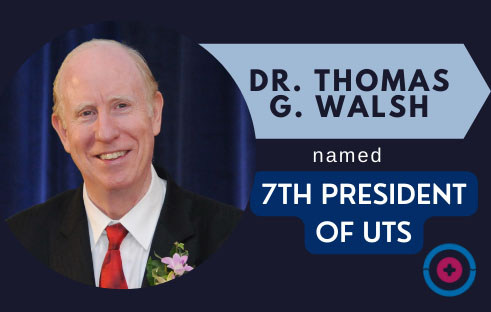 Dr. Walsh has worked closely with UTS Co-Founders Rev Sun Myung Moon and Dr. Hak Ja Han Moon in the establishment and in the leadership of the Universal Peace Federation (UPF) where he serves as International Chair. UPF holds General Consultative Status with the United Nations Economic and Social Council (ECOSOC). Dr Walsh has edited more than twenty books and publications for the Universal Peace Federation and he serves as Executive Editor of Dialogue & Alliance, an academic journal indexed by the American Theological Library Association.

Dr. Walsh’s assumption of the Presidency is fortuitous for Unification Theological Seminary at a time when it heightens its attention on its institutional role as a contributor to peace through the establishment of a new Master of Arts in Peace Studies. Dr. Walsh has served as the Moons’ principal emissary in countless UPF related initiatives aimed at addressing conflict and division in Asia, Africa, the Middle East, the Americas, and Europe. Dr. Franco Famularo, Chair of the UTS Board of Trustees, said, following Dr. Walsh’s election: “Dr. Walsh has literally traveled to more than 120 nations of the world. His experiences and insights will be an enormous benefit to UTS faculty and students alike. We are entering a new stage in UTS history.”