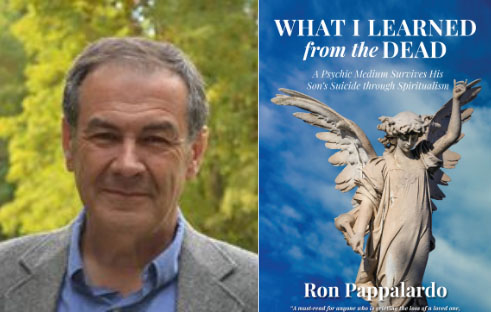 Unificationists will recognize these words from the Family Pledge:

“Our family… pledges to strive every day to advance the unification of the spirit world and the physical world...” – Family Pledge #5

UTS doctoral student Ron Pappalardo is launching a campaign to bring greater awareness of the reality of the spirit world in a way that is tailored for the general public.

His new book What I Learned from the Dead: a Psychic Medium Survives his Son's Suicide through Spiritualism combines a compelling personal story with descriptions of the spirit world. He presents the subject of communication between the two worlds in a way that is easy for the average person to receive and understand.

The book has already been written, professionally edited and will be published by Hawaii-based Sacred Life Publishers. It will be available on Amazon.com, Barnesandnoble.com, and in bookstores.

Ron is offering a 25% discount for early-birds who pre-order a copy through his Kickstarter campaign. For more information click here.

“This is a deeply touching story of love between a teenage suicide and his parents. Out of their serious concern about how their son is in the spirit world, their journey to study the other world starts. Their initial experiences of reunion as parents and son through mediums are dramatic and moving because they reveal how strong their mutual love is in spite of, or even because of, their initial regrets: the parents' regret that they may not have been good enough parents for the son, given his unfortunate incident, and the son's regret that it may have caused his parents much pain.

Life after death has been an increasingly important topic in Christian theology in recent decades. It is theologically interesting that Pappalardo's book shows out of his own experiences as a medium that spirits in the other world, including his son Joshua, can grow through their relationship of love not only with earthly people close to them, but also with other spirits in the spirit world. It is also noteworthy that he describes God as not only masculine but feminine as well. One important lesson we can learn from the book is that our mutual love, as human beings on Earth, reflecting God's love is the best preparation for our future transition to the other world. I highly recommend this book.”

“Ron Pappalardo’s latest book What I Learned from the Dead brings great insight to the world of mediums and those with the gift of communicating with entities on the other side, which includes Ron’s own son who died from suicide. It is a page turning, read-to-the-finish book that will leave very little doubt about the dynamic state of eternal life that exists after we leave this physical world at death and begin a new life in the spiritual world. A popular guest speaker in my World Religion classes, Ron’s book is recommended for people of all religious faiths—and none—who have lost loved ones and wonder about what their life is like on the other side.”