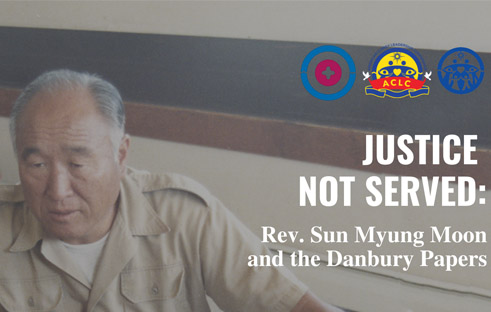 On July 20th 2021, the 37th anniversary of the day Rev. Sun Myung Moon began his 18-month sentence at the Danbury Federal Prison, Unification Theological Seminary (UTS) hosted “Justice Not Served, Rev. Sun Myung Moon and the Danbury Papers.” Nearly 800 Unificationists, scholars, faith leaders, and legal professionals gathered for this online event, to hear from experts in their respective fields, who studied this case carefully. This event was co-sponsored by the American Clergy Leadership Conference and Family Federation for World Peace and Unification, USA, and took place during the weekly Family Federation Tribenet meeting.

“I was with Rev. Moon that day from the early morning,” said Dr. Thomas Ward, President of UTS and MC of Tuesday evening’s program. “He sat with us in a semi-circle in the original home at East Garden, and he shared with us. I can never forget how he uplifted and comforted us, fully aware that in a few hours, he would report to a federal prison to begin his sentence. It was a day that none of us present would ever forget. What happened to Rev. Moon on July 20, 1984 was a grave injustice.”

Dr. Chung Sik Yong, regional president of Heavenly Parents Holy Community, North America, gave the opening remarks. He gave a brief introduction to the work that Father Moon was doing in America, and the resistance that he was met with before his indictment. “Like Socrates,” he said, “[Father Moon] chose to accept the sentence and abide by the law, even if his conviction was unjust.” He decided to leave Korea and enter prison in America, Yong said, “out of his love for this country, out of his respect for the sacred covenant between God and America’s founders.”

Professor William Lay, founding chair of the University of Bridgeport’s undergraduate and graduate programs in Criminal Justice & Human Security spoke next. His presentation focused on the historical and social context of the prosecution. According to Lay, there were three fundamental problems with this case: “the violation of Rev. Moon’s right to a fair trial, the way the trial was conducted as an inquisition, and the faulty jury charge of who owned the assets.”

Trial lawyer Professor Joseph Dunne, who teaches Criminal Justice and Human Security at the University of Bridgeport said that he did a thorough review of the case by finding transcripts, books, briefs and articles that were circulating. As a native New Yorker himself, he was “well aware of what the view of Reverend Moon was at the time of the trial. And it was a lot worse than you’ve been told.”

“I want you to know,” he continued, “that this is a case of justice not served. When [Rev. Moon] walked into the courtroom, the trial was already over.”

Professor Luonne Rouse, Co-Chair of the American Clergy Leadership Conference was the last of the featured speakers. He called on the audience to draw inspiration from Rev. Moon’s attitude and actions. On behalf of America, he asked for forgiveness. “Father Moon was able to remember what God’s greatness of heart and love is: forgiveness. He did not take this lightly, he took it seriously.” Forgiveness is not cheap or easy, said Rouse. It comes with sacrifice.

Dr. Michael Jenkins, president of Universal Peace Federation, and Rev. Naokimi Ushiroda, president of Family Federation USA, gave closing remarks. The program ended with an extended Q&A session, or “office hours,” where each speaker expanded on points they made in each of their presentations.

Remembrance of this event will continue in the years ahead so that more Americans may develop an understanding of this most unfortunate chapter of America’s history.

The full recording is available to watch here.