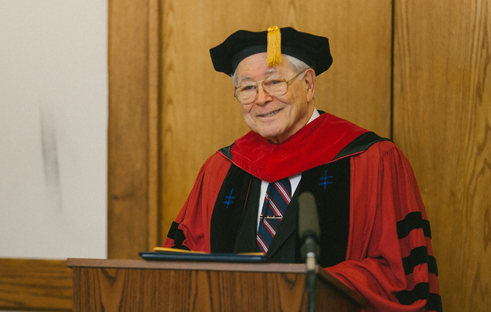 Dr. Richard Rubenstein, renowned Jewish theologian, rabbi, and former president of the University of Bridgeport, passed away on May 16th at the age of 97. The world remembers him as president of the University of Bridgeport and even more for his seminal book After Auschwitz (1966) which influenced an entire generation of Jews as they sought to understand the purposes of God in light of the Holocaust.

In After Auschwitz, Rubenstein dared to ask difficult questions about the nature of God, whose promises to His people seemed empty in the face of the utter destruction of a Jewish world. In the wake of the Holocaust, he came to believe that Jews have no real claim to a special covenant with God. He argued that Jews could no longer advocate the notion of an omnipotent God at work in history or espouse the election of Israel as the chosen people. Hence, he became known as a “Death of God” theologian. Yet in reality, his faith in God was not shaken, but rather transformed. Recognizing that God’s purposes were greater than the traditional understandings of Judaism, he began to explore what they were although he remained faithful to his Jewish roots.

Dr. Rubenstein’s search led him to the Unification movement. It began when he attended the UM-sponsored International Conference on the Unity of the Sciences (ICUS) in 1976. Pressured by colleagues not to attend due to negative media coverage, his response was that “as a trained theologian and historian of religion,” he “was better prepared to evaluate a religious movement than a newspaper reporter.” Enormously impressed with the quality of the conference, He became an active member of the Professors World Peace Academy (PWPA). Dr. Rubenstein offered a Jewish prayer to the newlyweds at the 2075 couple Blessing in Madison Square Garden in 1982. He participated in the God Conferences, and later the Assemblies of the World’s Religions, under the auspices of the International Religious Foundation (IRF). He served on the Advisory Board of The Washington Times and as head of Washington Institute for Values and Public Policy. In 1995 Rev. Moon supported his assumption of the presidency of the University of Bridgeport, where he served in that capacity from 1995 to 1999, after which he taught as a Distinguished Professor of Religion and Professor Emeritus.

Dr. Rubenstein’s long and constant association with the Unification movement stemmed from a liberating experience of faith, opened up to horizons on a global scale. His powerful intellect saw it too: as a scholar of Max Weber, he had thought that the Holocaust was proof that humankind was doomed to be confined in the “iron cage of modernity,” defined in Western terms. But the vitality of Unificationism and the new works of God that he saw in Korea and East Asia burst the bars of the Weberian iron cage.

All the while Rubenstein had to deal with the brickbats that were thrown at him not only from members of the academy but more seriously from his fellow rabbis who could not understand why he associated with the Unification movement. Rather than caving to this opposition, Rubenstein dug in his heels and became one of Rev. Moon’s leading defenders in some of the most trying times.

One of the “most challenging tasks ever entrusted to me,” Rubenstein recalled, was that of responding to Rev. Moon’s public declaration of his messianic vision in 1992. Rubenstein described it as “one of the most extraordinary moments of my entire career.” He described his approach to that moment:

The nature of Rev. Moon's calling is a matter of faith. I neither wanted to say anything that would mar the solemnity of the occasion, especially for his disciples, not did I want to misrepresent my own religious commitments

Before the distinguished audience of world leaders, including numerous high ranking officials including some who had led their nations, he responded to Rev. Moon’s declaration:

For myself, and for many of my peers whose vocation is the scientific study of religion, awesome religious inspiration is something that happened, if at all, long ago … The situation is radically transformed … when we are confronted by an inspired religious leader whose vocation is in the process of unfolding in our own times and even before our very eyes.

We are not accustomed to such a manifestation of spiritual power and charisma. Our scientific and professional training has not prepared us for the encounter … Nevertheless, the spiritual power is there, and, whatever may be the religious tradition in which we are rooted, we feel it.

Dr. Rubenstein offered the invocation at the Seminary’s first graduation in 1977 and received an honorary doctorate from UTS in 2013. On more than one occasion, he stated, “No other individual outside of my immediate family has had a greater impact on my adult life than Rev. Sun Myung Moon.” Having said that, he did not retreat into a private appreciation of the man, but put his reputation and career on the line. Rev. Moon recognized his courage and, on more than one occasion, said of him, “Richard Rubenstein has guts!”