Women's Leadership in the Age of Mother Moon 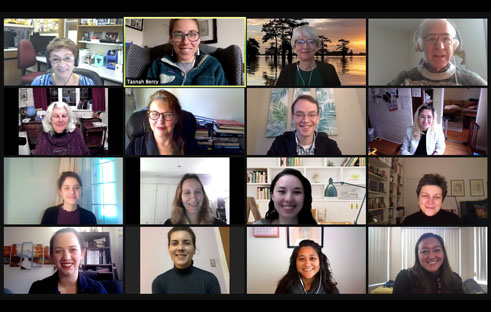 On January 4th, 2021, UTS hosted its second online theologian’s conference, which brought its students into dialogue with mainstream scholars. The topic of this conference was “Women's Leadership in the Age of Mother Moon.” It was co-convened by Dr. Andrew Wilson, Professor of Scriptural Studies at UTS, and Dr. Eileen Barker, Emeritus Professor of Sociology at the London School of Economics.

Dr. Barker, author of The Making of a Moonie: Choice or Brainwashing?, has a longstanding relationship with UTS, and was the co-convener of the first online theologians conference, “Passing the Torch to a New Generation: The Unification Church in Transition” that took place in June 2020. She is the founder of the Information Network Focus on Religious Movements (INFORM), which provides factual information on new religious movements to governments and law enforcement agencies.

Another distinguished participant was Catherine Wessinger, PhD, the Rev. H. James Yamauchi, S.J. professor of the history of religions at Loyola University New Orleans, and the co-general editor of Nova Religio: The Journal of Alternative and Emergent Religions. She is also the co-director of the Women in the World’s Religions and Spirituality Project.

Other scholars who participated were:

The webinar was kicked off by a greeting to the scholars and students by Dr. Thomas Ward, president of UTS, followed by a brief introduction by each of the scholars. Each student then also introduced themselves and gave a short reflection about the topic of female leadership in the Unification faith community in relation to Mother Moon’s leadership in the last eight years. Based on these reflections, scholars asked questions of the students’ understanding and experience, and a very lively and engaging discussion followed.

At the conclusion of the conference, many participants expressed their desire for the conversation to continue offline, and people exchanged contact information to stay connected for further discussion.

One scholar participant noted that she was struck by “how the faith of so many of them has flourished under Mrs. Moon's leadership style, whereas they struggled under previous emphases. That could be age-related, of course. Youth are more rebellious by nature. But it could also be that there is something inherently more attractive about her approach for post-millennials.“

“It’s been very educational. I think you have a lot going for your faith and your organization, and the second generation,” said another scholar participant. I think you just need to continue to build on what you’ve got.”

“[This conference and the last conference] helped me identify what UTS has given to me,” said Rev. Crescentia DeGoede. “I don’t think I could have spoken like this two years ago. I wouldn’t have felt as confident or as clear about what I believe in or what I’ve experienced, and why I believe those things, and formulated them in this way. But I honestly realized that through the discourse and the connection of the students with each other, and learning from the professors, [UTS] has fostered in me a desire to share and be connected and learn from others. So I hope we can continue this kind of conversation in the future. It’s been beneficial to me also, I think I’m going to use some of what we talked about in my next sermon!”