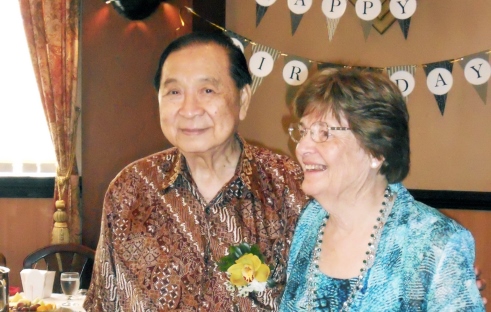 Dr. Edwin Ang, a key leader from the early history of Unification Theological Seminary has ascended after a long and meaningful life. Dr. Ang is remembered for the enormous difference that he made in the lives of so many. Dr. Ang was a key leader at UTS where he began as Dean of Students and eventually rose to Executive Vice President. Along with founding UTS President David S. C. Kim and Dr. Therese Stewart, he was a key figure in the formative years of UTS. He played a leading role in the process that led to UTS receiving its absolute Charter from the New York of Board of Regents as well as its accreditation from the Middle States Association of Schools and Colleges. Dr. Ang is also greatly appreciated at UTS for the role that he played as a mentor. He always paid thoughtful attention to the concerns of UTS students and offered them thoughtful advice.

UTS President Thomas Ward said that he remembered that, while studying at UTS, he once faced a decision that, it turned out, would affect his future direction in life: “I came to Dr. Ang and asked what he would recommend, given the situation. His insights made all the difference in the world. I know that I am one of so many who came to the right decision because of this remarkable, wise, and saintly man.”

Dr. Edwin Ang was born in the small village of Bowerno, East Java, Indonesia on July 29, 1926 and was raised in the Confucian tradition. He was named Kian An Ang, which means “to establish peace after the flood” (which he felt was significant). Dr. Ang firmly believed he was guided by God through every step of his life.

He graduated from St. Stephen’s College, a high school in Hong Kong in 1949, at which time he was baptized in the Anglican church. Following graduation, he received an Associate degree in Accounting from the International Institute of Accountants and later received a full scholarship to attend the International Christian University in Tokyo, Japan, where he earned his undergraduate degree in Economics in 1958. Dr. Ang went on, following his undergraduate study, to the University of California at Berkeley where he was awarded his PhD in Economics in 1972.

Over the years, Dr. Ang served on the UTS Board of Trustees, the HSA-UWC Board of Directors, and the Korean Cultural and Freedom Foundation (KCFF) Board of Directors. He served as President of International Chinese Association from 1984-1997, where he cultivated the Chinese member fellowship and community in America. In 1996, Dr. Ang received the mission of National Messiah to Egypt. In 2020, Dr. Ang and his wife Marie were inducted as a Cheon Bo (Heavenly Treasure) couple, one of the highest recognitions that a Family Federation couple can receive.