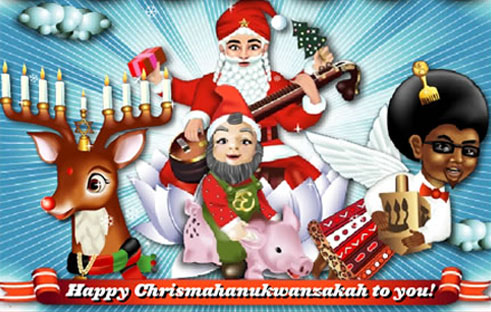 In the third Faculty Roundtable series for this academic year on December 16th, 2020, Dr. Ronald Brown, adjunct professor at UTS in World Religions, spoke on the topic of Chrismahanukwanzakah: The World’s First Global Holiday.

The topic at this December Round Table was Chrismahanukwanzakah, which is what Brown calls the New York-created global holiday and “includes all religions, all ethnic roots, and everybody else.”

Brown, who is recognized as an authority on New York City and its history, discussed Christmas’s Roman Catholic roots in the Roman holiday Saturnalia, and the controversy surrounding Christmas among the diverse Christian denominations of colonial New York. He traced the popularization of Christmas that followed in New York City.

“New York was a battlefield of anti-Christmas and pro-Christmas factions.” Christmas conquered New York, Brown said, because of the mass immigration of Irish Catholics and German Catholics and Lutherans.

Brown then described what he referred to as “the secularization of Christmas” in the young country of America as the need arose for a national holiday that everybody could celebrate. Santa Clause was introduced, Christmas trees were brought into the house with the advent of the string of christmas lights by Edison. The first Thanksgiving Day Parade took place in Philadelphia in 1920 followed by New York in 1924 and ushered in the holiday season as we know it today. The holiday then began to go global.

The same battles that took place when Christmas arrived in New York City are now taking place globally, Brown told us. In India, people are campaigning against non-Indian holidays. Christmas is becoming banned increasingly in Muslim countries. The opposition to this globalized holiday is even coming under attack in America, where debates exist about whether or not to “put Christ back in Christmas.”

The globalization of religions is a reality, and evoking a very vicious anti-globalization reaction, Brown said. Yes, religions are becoming increasingly divided and antagonistic, but this is a reaction against globalization. “We are experiencing the birth pains of a new global culture,” Brown tells us, and just as Christmas conquered New York City amongst controversy, this global-level reaction to globalized religion is an indicator of the arrival of a new “earthly civilization,” where people start thinking of themselves as one common race of people with one common identity.

The presentation was followed by a Q&A session. Click here to view the recording of Dr. Brown’s presentation, and stay tuned for the details of our next Roundtable event!