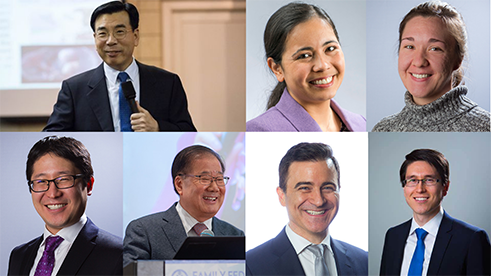 Dr. Ki Hoon Kim, who was the Continental Director of Family Federation USA (FFWPU) in North America for the last eight years, has been named the Cheon Eui Won Chair of North America. Dr. Kim studied Chemical Engineering at Kyung Hee University before earning his Masters of Divinity from UTS, as well as an honorary doctorate of Theology from Sun Moon University.

Between 1997 and 2007 Dr. Kim served as a bishop in Chicago, and set up the Korean Broadcasting Company. In addition to acting as Continental Director, Dr. Kim served as national chairman of the American Clergy Leadership Conference, and launched the annual True Family Values Banquet in Chicago which brings together over 1,000 clergy leaders and those from business and political communities. He is also currently co-chair of World Clergy Leadership Conference (WCLC).

Dr. Chung Sik Yong, who holds a doctorate in theology from Sun Moon University and a master’s degree in business administration from Gwangju University, was named the new FFWPU North America Regional President. Before coming to North America, Dr. Yong served as the Regional Chair for the Universal Peace Federation of Asia from May 2008 to October 2020.

Rev. Dunkley was previously the President of FFWPU-USA. He holds a BS in marketing and communication from Platt-College-San Diego, and has studied Korean language at Sun Moon University, as well as Italian language and culture at Universita per i Stranieri. He will be graduating from Unification Theological Seminary with a Master of Arts in Religious Studies in spring 2020.

Reverend Naokimi Ushiroda, a second generation Unficationist who is currently completing an MA of Religious Studies at UTS, was named the new president of FFWPU-USA. He holds a BSE from Wharton School of Business in Entrepreneurship and Real Estate. He previously was the director of Family Federation’s Youth and Young Adult Ministry, President of Youth and Students for Peace, and President of Collegiate Association for the Research of Principles. He also has his own business as a life coach, and is passionate about empowering individuals, families, and tribes to be able to manifest a culture of heart.

Reverend Miilhan Stephens, also a second generation Unificationist who is completing an MA of Religious Studies at UTS, is the new President of Youth and Students for Peace. He was previously the Secretary General of FFWPU-USA’s Northeast Region, and Vice President of FFWPU-USA. He holds a BS in Food Science from University of Maryland, College Park.

These new appointments are a part of Dr. Hak Ja Han Moon’s resolve to immediately appoint and raise new young leaders that will be able to guide the Unification movement into the future.

Part of UTS’s mission is to provide advanced academic and professional education for current and future leaders of the Unification community, and we are proud that so many new leaders are a part of the UTS network of students and alumni.