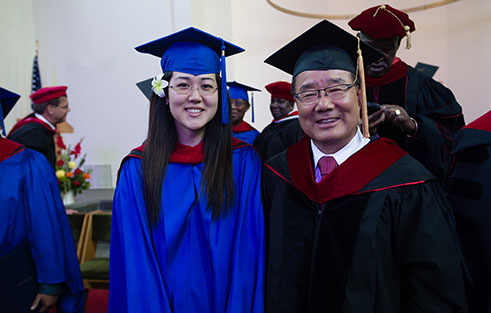 Each event focused on one or two degree programs, providing an opportunity for students interested in particular degree programs to receive information specific to their interests. In total, 70 prospective students from the U.S., Europe, Asia, and Africa registered.

On July 22, two events were held. The first focused on the Doctor of Ministry. Ms. Marivir Montebon, a recent graduate of the MA in Religious Studies, a freelance journalist, and the owner of an online magazine, “OSM!” did an excellent job as Master of Ceremonies. Dr. Drissa Kone, Director of the Doctor of Ministry Program and Assistant Professor of Conflict Resolution and Ministry, described the features and benefits of the DMin, outlining a flexible approach in which studies may be completed almost entirely online over a three-year period. He further explained that students participate in a two-week on-campus intensive study during each of the first two years of study, and in the third year complete their dissertation. The spotlight testimony was delivered by Dr. Franco Famularo, graduate of the DMin Program and President of FFWPU of Canada. Dr. Famularo outlined the great value and significant impact the DMin has in his own life and ministry, stressing its flexibility for working professionals.

On the same day, a second Open House introduced the Accelerated Master of Arts in Religious Studies that was specially designed for Young Unificationists. Naokimi Ushiroda, Assistant Pastor of the Clifton, NJ Family Church and current student in the Accelerated MA in Religious Studies, and Christina Lange, Assistant to the President and Director of Special Projects, served as MCs. Christina delivered an inspired overview of the Accelerated MA in Religious Studies, describing Father and Mother Moon’s vision for the Seminary, the benefits of a UTS degree for Second Generation Unificationists, and the special scholarship opportunities available. Naokimi spoke about the positive academic experience the program affords and underscored the camaraderie and support that Young Unificationists enjoy as cohort members.

On July 25, a third Open House focused on both the M.A. in Religious Studies and the Master of Divinity. Steven Boyd, Director of Enrollment Management and Student Life, was MC. Christina Lange gave an excellent overview of both Master degree programs, detailing core coursework and optional areas of concentration. She also emphasized the programs’ affordability and the opportunity for scholarships. Spotlight testimony was given by Robert Duffy, Secretary General of UPF Canada and current student in the Master of Arts in Religious Studies. Mr. Duffy emphasized how much he benefited personally and professionally by enrolling in the MA, reminding us that no matter how old you are it is never too late to further your education.

In each instance, Dr. Thomas Ward, UTS President, along with the MCs and the spotlight speakers, answered participants’ questions at length, staying on after the formal ending of the program to discuss personal queries.

To conclude each event, Dr. Ward skillfully summed up the role of the Seminary and value of a UTS degree for both First and Second Generation members of Heavenly Parent’s Holy Community, as well as for students from other faith backgrounds.

The next Virtual Open House will be held on Thursday, August 13 at 1 pm EST. Details will be available soon.