Viktor Frankl: A Life with Meaning and Moral Autonomy 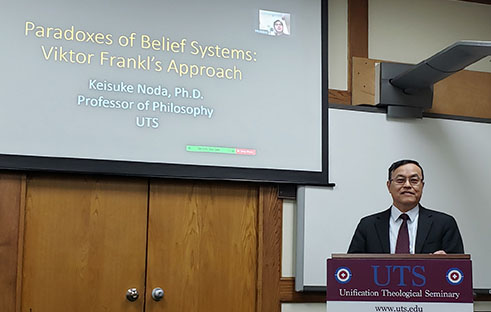 Viktor Frankl’s Logotherapy, which uses a multidimensional approach to diagnose and treat mental illnesses, may provide a sparkling hope for a society which has increasingly become hostile and confused.

In a recent forum, Dr. Keisuke Noda, UTS professor and dean for Academic Affairs, said that the Franklian Logotherapy’s multidimensional lens looks at people’s ‘existential vacuum’ or state of meaninglessness as the cause of neurosis, addiction, depression, and violence.

Noda presented his study titled ‘Paradoxes of Belief Systems: Viktor Frankl’s Approach’ to members of UTS faculty and students at the Oak Room on February 25, 2020.

Frankl, an Austrian psychiatrist of Jewish heritage, developed Logotherapy to help clients identify their own ‘meaning’ in life in order to transcend trauma, grief, and other psychological issues. Frankl deepened his school of thought while surviving several prison camps during the Holocaust.

Frankl was a stalwart in psychology as much as Sigmund Freud who developed Psychoanalysis and looks at sex as a subconscious motivator for behaviors, and Alfred Adler, father of Client-centered therapy, which looks at the quest for power as the driver of behavior.

Logotherapy meanwhile sees the meaning as a life motivator and healer. This therapy looks at mental issues through cultural backgrounds and religious and political beliefs, and all the other long-held belief systems, and yet, transcends above these belief systems in order to provide therapeutic support to the client.
According to Noda, Frankl’s approach was not theological but rather medical and scientific. Frankl, although a deeply faithful Jew, was not a fan of blind obedience to authority and blind conformity to society in defining and determining treatment, postulated Noda.

He criticized all forms of reductionism such as those espoused by Freud and Adler and presented a multidimensional approach.

Frankl’s balanced use of truth provides a non-judgmental, unbiased treatment of persons, said Noda. An example of biased belief system-based approach would look at Joan of Arc, for instance, as schizophrenic by psychiatrists. But to Catholic faithfuls, Joan of Arc was a saint.

“If you take into account all of these belief systems, all of them are true as far as Joan of Arc is concerned. It is therefore important to look at people comprehensively,” said Noda.

According to Noda, the moral autonomy of every individual determines one’s meaningful and sensible life, which means doing the things that one loves, serving or helping others, regardless of predetermined (and judgmental) belief systems.