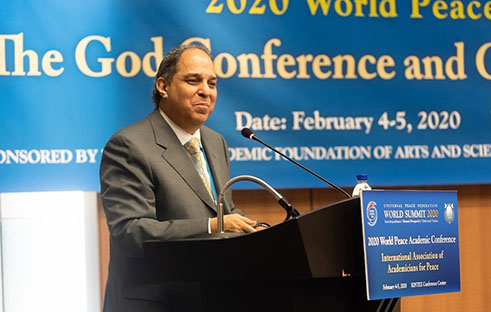 Dr. Frank Kaufmann, a long-time member of the UTS Faculty, an early UTS graduate, and also President of the Professors World Peace Academy USA oversaw the coordination of American scholars who attended the Summit 2020 Conference which took place in Seoul, Korea from February 3-6, 2020. The Summit marked the one hundredth anniversary of the birth of the Reverend Sun Myung Moon, who, together with Dr. Hak Ja Han Moon, who among their multitude of achievements, founded the Unification Theological Seminary in 1975 as one of their many initiatives to further interfaith dialogue and introduce the role that Unificationism cay play in such activities.

Summit 2020 also served as the venue to launch the International Association of Academicians for Peace (IAAP) where Dr. Kaufmann spoke. For Dr. Moon, IAAP invites academics to play a more deliberate role in peacebuilding through their research, their teaching, their involvement in constructive, alternative modes of diplomacy. In his presentation at the Conference , Dr. Kaufmann spoke on “Reverend Moon’s Influence on Religion in the 20th and 21st Centuries”. He described Reverend Moon’s commitment to peace and to inter-religious dialogue as follows: “The growth and influence of Reverend Moon’s interfaith efforts, and the fond love found among his fellow travelers in this work is because the work flowed from his teaching and life that God is the founder and main agent of interfaith work.”

Dr. Kaufmann also spoke of the importance of Reverend Moon’s founding of Unification Theological Seminary in this initiative noting that in 1975 Reverend Moon founded the Unification Theological Seminary (UTS), hiring faculty with a makeup unprecedented in the history of theological, higher education. He added that “Founding this school became the springboard of world ecumenical theology and activity that fundamentally changed the landscape of religious scholarship in our time.”