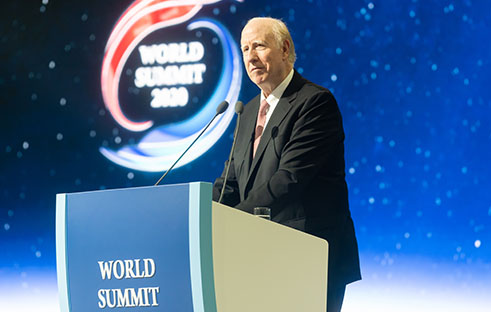 From February 3 through 7, a Conference and Exhibits took place marking the Centenary anniversary of UTS Founder the late Dr. Sun Myung Moon and the seventy-birthday of his spouse and UTS Co-Founder Dr. Hak Ja Han Moon. The program brought together 2,700 religious, political, business, and academic leaders including current Heads of State and Government, Nobel Laureates, and some of the world’s most successful business entrepreneurs. Dr. Thomas J. Ward, UTS President and Professor, as well as Dr. Andrew Wilson, Professor of Scriptural Studies, and Dr. Drissa Kone, Assistant Professor of Ministry Studies participated.

Dr. Ward had organized and oversaw four of the academic sessions with the focus on “A Vision for World Peace” and in a paper that he presented, he elaborated on the very substantive role that the Moon couple played in ending the Cold War. Dr. Andrew Wilson participated in the panels dealing with Natural Sciences. He presented a paper on the International Conference for the Unity of the Sciences, founded by Reverend Moon. He also served as a Moderator in these sessions. Dr. Kone spoke in a panel dealing with the role of God and religion in addressing current crises.

The sessions took place on February 4 and 5. At the conclusion of the seminar, Dr. Jin Song-bae, Chair of the Unification Thought Institute, presided over the founding of the new organization the International Association of Academicians for World Peace. The closing session was co-chaired by Nobel Laureate Mario Molina. In the plenary session of the Conference, participants heard from a variety of luminaries including His Excellency J. Morales, current President of Guatemala; former United Nations Secretary-General Ban Ki-moon and Dr. Mario Molina, Nobel Laureate.

Dr. Hak Ja Han Moon, who led the Conference, shared her vision of how to realize “One Global Family Under God.” Dr. Ward described the Conference as “precedent-setting.” UTS felt privileged to participate in this historical event, with so many distinguished leaders and scholars. It provides our UTS academics with a unique opportunity to engage and also provide contextualization for the important work being carried out today by Dr. Hak Ja Han Moon today, based on work that she and Dr. Moon launched decades earlier and which they have continued to support for decades.