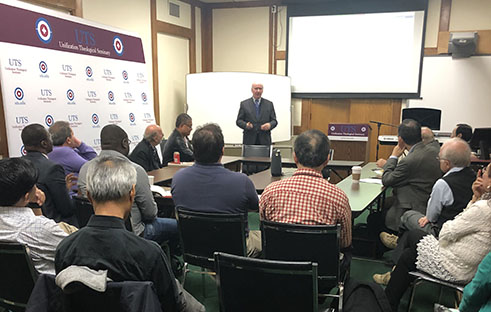 There has been a growing movement among Korean-American civic organizations to condemn Japan’s comfort women system of World War II—but discerning an appropriate American response has proven difficult. Dr. Thomas Ward, president of the Unification Theological Seminary (UTS), addressed this controversial issue on November 5, 2019 in his inaugural presentation for the UTS Faculty Roundtable Series: “Fanning the Flames: The Role of Local U.S. Governments in Undermining Korea-Japan Relations.”

Tens of thousands of women were conscripted as “comfort women” during the course of the war. These women were made to travel with Japanese soldiers on the Pacific front, effectively acting as sexual slaves. Today, Korean-American activists seek to redress this tragic history by constructing memorials to comfort women in cities throughout the United States. Fifteen comfort women statues have been built since 2010 as a result of their advocacy, four of which are in New Jersey alone.

But Dr. Ward and colleague Professor William Lay have found through their research that the history of the comfort women system is not necessarily as simple as it at first seems.

The current push for memorials, for instance, is typically predicated on a one-sided narrative that indicts Japan for its wartime abuses while ignoring those of Korea and America. This narrative overlooks factors like Korean complicity in procuring women for the system; and it disregards the shocking fact that many American soldiers made use of the system during the first seven months after the war’s end in 1945.

Dr. Ward stressed in light of these findings, “We have culpability. How can we be setting up statues in the United States just pointing at Japan when we have culpability? We have to accept our responsibility.”

Failing to do so, Dr. Ward maintained, could have significant geopolitical consequences. The stability and peace of the Far East region at this time depends upon whether or not the United States, Japan, and Korea can work together to encourage China’s movement as a nation toward greater democracy and respect for the rule of law. But Dr. Ward and Professor Lay have found that the unity among these three nations is seriously challenged when Korean-American activists and local American governments ignore the larger picture of the comfort women system in pursuit of their own aims and agendas.

The Roundtable Series will continue through 2020 with monthly presentations by the faculty of UTS. For details about upcoming events in the series, visit the schedule on our website.

Dr. Ward’s findings are the result of five years of extensive research with his colleague Professor William Lay. They have published their findings in full in Park Statue Politics: World War II Comfort Women Memorials in the United States.