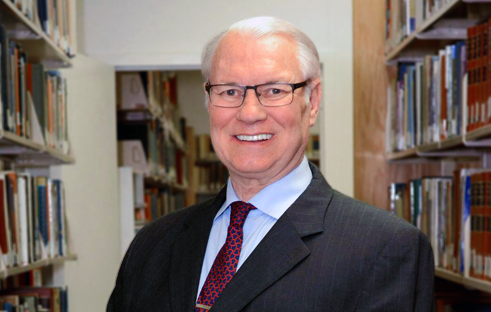 The Board of Trustees of the Unification Theological Seminary (UTS) voted on Monday, October 14, 2019 to name Dr. Hugh Spurgin President Emeritus. This honor comes in recognition of his distinguished leadership and service during his tenure as the fifth UTS President from January 2015 to August 2019.

Dr. Hugh Spurgin, a graduate of the first UTS class in 1977, took the reins of UTS at a difficult time and successfully navigated the institution to a new level. Under his tenure, UTS observed the 40th year of its founding, reaffirmed its regional accreditation by the Middle States Commission on Higher Education, strengthened its relationship with the Family Federation for World Peace and Unification, relocated its main campus to midtown Manhattan, placed greater emphasis on its website and social media, and oversaw UTS as it gained full accreditation for its Master of Arts in Religious Studies and established its first complete online academic program.

Dr. Spurgin served on the UTS Board since the 1980s and he also served for eighteen years in a leadership role in the Bridgeport International Academy in Connecticut. Dr. Spurgin earned Master degrees from the Maxwell School at Syracuse University and from Union Theological Seminary, as well as a Ph.D. in History from Columbia University.

He has also served since the late 1960s in numerous major leadership role in the Unification Church including Vice President for education and he continues to serve as a member of the HSA-UWC Board of Directors.

“I have had the pleasure to know and work with Dr. Hugh and Nora Spugin for almost five decades. They have had an impact on me because of their deep dedication, their humility and humanity, their excellence as teachers, and their determination and ability to get things done.

Dr. Hugh Spurgin always leads by example, and he has had a profound impact on my life and the lives of many others. Through his Presidency, he has provided UTS with a solid foundation for next steps and we have much to be grateful for because of his outstanding service.”