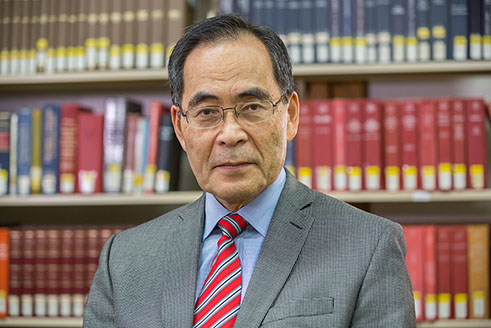 The Board of Trustees of the Unification Theological Seminary (UTS) voted on Monday, October 14, 2019 to name Dr. Theodore Shimmyo President Emeritus. Dr. Shimmyo was one of three former presidents conferred this status at the Board of Trustees meeting. This honor comes in recognition of Dr. Shimmyo’s years of distinguished leadership and service as the second president of UTS from 1994-2000.

The themes of his administration were leadership development and the attitude of faithful attendance to God. Under his leadership, UTS strengthened its field education program by instituting internships, prepared more than thirty missionaries for service in South America, inaugurated The Journal for Unification Studies (in 1997), and attained regional accreditation.

Dr. Shimmyo is especially knowledgeable of Christian theology, and has a special interest in Christology and the Trinity. He finds it important not to study theology merely as doctrine. He tries to help students to relate it to their lives, and to return theology to its original purpose of discovering God as Creator and Parent. This practical theological approach was already largely shaped when he was still in Japan where his reading of Augustine and Luther helped to transform his life of faith.

Dr. Shimmyo’s approach is also ecumenical in that he leads his students to have a precious glimpse into a universal element in each and every theological tradition, with the hope that different traditions will be able to relate to one another by humbly going beyond their particularities.

Since stepping down as President in 2000, Dr. Shimmyo has continued to teach a variety of theology courses as Professor Emeritus of Theology at UTS and he is working on a new book about Unification Theology. Dr. Shimmyo is a member of the Karl Barth Society of North America. His numerous theological publications include Explorations in Unificationism (1977) and articles in the Journal of Unification Studies.

“When I think of Dr. Shimmyo, three things come to mind: his sincerity, his humility, and his intense love; for his work, the subjects he teaches, and especially for Jesus,” shared current seminary student Yoshie Manaka. “This combination of characteristics makes him truly a treasure for the students who have the privilege of learning from him. He puts great care and effort into conveying the course material, and it is his attitude, more than the material itself, that impresses upon us the gravity of what we are learning. He takes every sentence uttered or written by his students seriously and takes care to address each individually. I have never met anybody who loves Jesus as much as Dr. Shimmyo does. This stands out to me because I feel that a personal relationship with Jesus is a vital, yet often missing part of 2nd generation Unificationist faith education. I have inherited a lot from Dr. Shimmyo in the year that I’ve known him, and I’m looking forward to learning even more.”