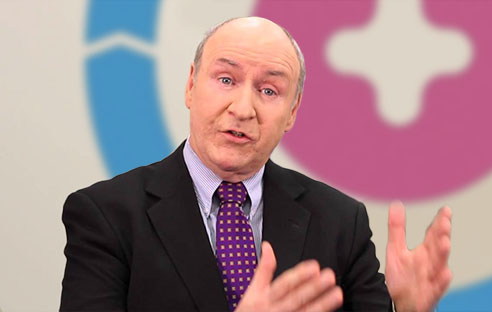 UTS faculty and staff welcomed Dr. Thomas Ward as the Seminary’s sixth President at a gathering in the Oak Room at 4 West 43rd St. on August 22, 2019.

President Ward succeeds Dr. Hugh Spurgin who stepped down effective August 8. Dr. Ward, a 1981 UTS graduate, served most recently as Dean of the College of Public and International Affairs at the University of Bridgeport from 2000-2018. Two former presidents of UTS were in attendance at the gathering, Dr. Theodore Shimmyo (1994-2000) and Dr. Tyler Hendricks (2000-2010).

In his broad-ranging remarks, President Ward expressed his appreciation for the significant advances made at UTS since 2015 under the administration of Dr. Spurgin including reaccreditation, solidifying the Seminary’s relationship with the Family Federation, overseeing relocation of the main campus to 4 West 43 Street, launching the Seminary’s first fully-online distance learning courses.

Dr. Ward also addressed the Seminary’s 2017-2022 strategic plan, placing particular emphasis on the objective of transitioning to a new generation of Unification and UTS leadership. He said that he plans to take steps in the next 6-8 months to incorporate the Family Federation’s second generation into UTS leadership.

Two of his other emphases were enrollment and program prioritization. Having extensive experience in program development and recruitment, Dr. Ward plans to undertake a review of UTS enrollment strategies and by mid-September 2019 open discussion with faculty and administration on initiating a review and prioritization of existing academic programs.

In reviewing “Phases of UTS Life,” Dr. Ward noted that from its founding in 1975 through the mid-1990s, UTS was a place to prepare Unification leaders. From the mid-1990s until 2012, UTS expanded to serve as an Interfaith Seminary. From 2012-2019, the Seminary experimented with an undergraduate college followed by a return to its identity as an Interfaith Seminary. He said there is now a call from the Family Federation for UTS to re-affirm its original mission.

President Ward wants to improve the Seminary’s public relations, including web development and wants to represent faculty better in outreach, highlighting their research interests, career highlights and even hobbies and interests. He also wants to tell alumni success stories, positions held, places they have studied, publications and achievements. He highlighted the “need to build UTS pride.”

Dr. Ward closed by envisioning UTS as a “home of thought,” educating and developing ethical and competent leaders, supporting intellectual and spiritual preparedness for the challenges and confusion of the world today, helping to define the future of the Family Federation and its related organizations, strengthening and improving inter-religious partnerships, and contributing theologically-philosophically-sociologically-historically sound, original approaches to peace and development to the national and international community.

Those present were enlivened and energized by President Ward’s presentation which was followed by a luncheon.