UTS Alumni meet the Pope at the Vatican 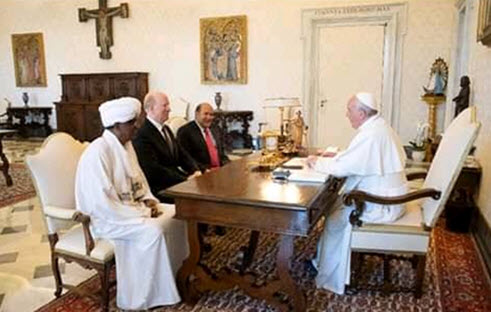 A delegation from the Universal Peace Federation International (UPF) had a private meeting with His Holiness Pope Francis at the pope's office in the Vatican.

The thirty-minute meeting took place on July 1, 2019, in the pope's office around a simple desk with His Holiness, the UPF delegates, and an interpreter.

Pope Francis has been a leading advocate for many of the same ideals and values that UPF also embraces, such as the promotion of interreligious dialogue through the Pontifical Council for Interreligious Dialogue; strengthening the family through the Pontifical Council for the Family; and care for the environment, as evidenced in the pope's encyclical Laudato si' (“Praise Be to You”), on care for our common home.

On several occasions UPF has participated in programs at the Vatican, such as the special consultation on the crisis in Syria, convened by the Pontifical Academy of Sciences in 2014; the 50th anniversary program in honor of Nostra aetete ("In Our Time"), the 1965 encyclical of Pope Paul VI that opened the way for more respectful engagement between Catholics and people of other faiths; and an ongoing collaboration with the Holy See Mission to the United Nations in New York.

In his opening remarks, the pope underscored the importance of peace. He spoke with deep concern about the hypocrisy of those who speak of peace but sell weapons of war. He expressed genuine appreciation for all those who work for peace.

During the meeting, Pope Francis was briefed on recent developments and programs of UPF, including International Association of Parliamentarians for Peace (IAPP), the Interreligious Association for Peace and Development (IAPD) and the effort to engage all sectors, a principle that he wholeheartedly affirmed. UPF's global work, based on the vision of the founders, was summarized.

His Holiness spoke of the importance of prayer and of the family. He then related the background of the Document on Human Fraternity for World Peace and Living Together that resulted from a collaborative effort between Pope Francis and the Grand Imam of Al-Azhar on February 4, 2019, in Abu Dhabi, United Arab Emirates. The document invites “all persons who have faith in God and faith in human fraternity to unite and work together so that it may serve as a guide for future generations to advance a culture of mutual respect in the awareness of the great divine grace that makes all human beings brothers and sisters.” Pope Francis presented Dr Walsh, Dr Hamad, and H.E.Badr with a copy of the document.

The meeting concluded with a brief discussion about the upcoming UPF World Summit 2020. A request was made to His Holiness to submit a message of encouragement and support. The UPF delegation was encouraged to submit a formal request in the coming days.

It is hoped that this important meeting will serve to enhance and strengthen the relationship between UPF and the Catholic Church. Members of the delegation made it very clear to Pope Francis that UPF wants to be supportive and to contribute to advancing mutual concerns for peace for all humanity.

When asked about the preparation for the meeting with the Pope and some personal comments about this special meeting, Taj Hamad shared this: “I have been working to set up this meeting for more than a year. Three months ago I went to Rome for a preparatory meeting.

Originally I had requested for the meeting to be in May or June. However, we received an email apologizing for the unavailability of appointments in those months, but granting Dr. Walsh and myself a private audience with the Pope for July 1st. Which is our Blessing anniversary!

The Ambassador of Egypt to Italy was instrumental for arranging the meeting and he was invited, too. He is an old friend of several years.

Upon our arrival we were met by a kind man at entrance of the Pope office. He gently greeted us and thanked us for our work for peace!

I asked how long could we meet and he replied, “Half an hour but if you need more that is ok!!” 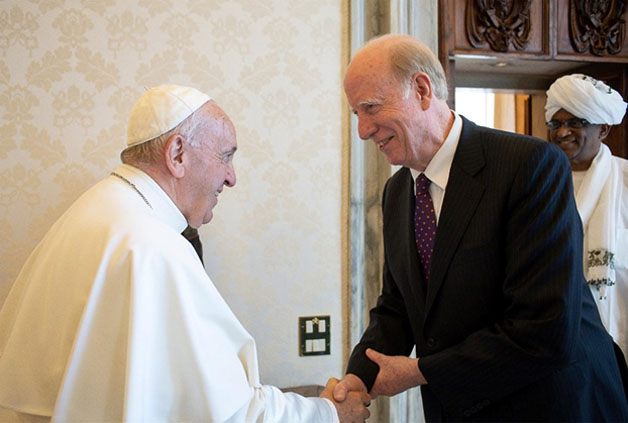 When we entered, Pope Francis greeted us at the door and separately shook our hands and took photos before he invited us to sit at his desk, with a translator by his side and the three of us in front of him. All the photographers and other assistants left the room. 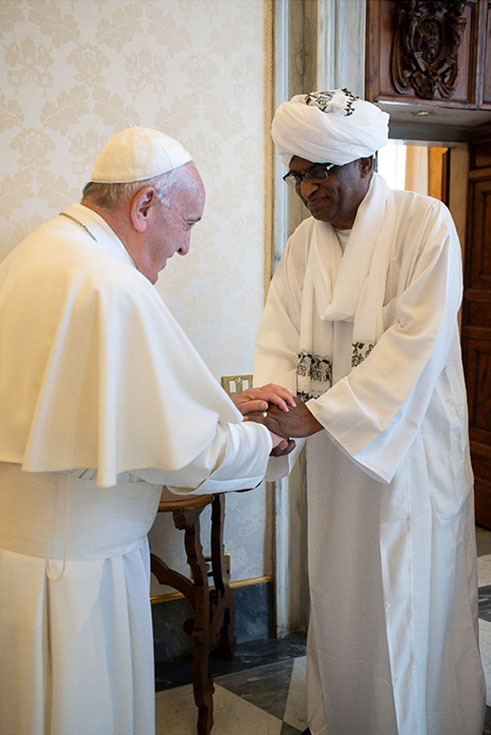 He had a very warm presence with a gentleness and humility that makes you feel at home. He is a great listener, and periodically the translator said a sentence or two, which showed that Pope Francis understood the rest.

Dr. Walsh gave an overall description of the UPF work and the Pope listened carefully.

I thanked him for his work for peace and mentioned that I consider him the moral authority figure in the world today.

I thanked him for coming to the UN a few years ago and his sincere efforts to contribute to world peace. I shared about our ongoing partnership with the office of the Holy See at the UN.  I also thanked him for showing an example of being a “servant leader” by kissing the feet of the South Sudan president and the opposition figures in a humble appeal for them to make peace between them. I then thanked him for visiting the United Arab Emirates in his special effort to work together with Islam.

He stood and walked to his closet and gave each of us copies of the famous document on “Human Fraternity“ For World Peace and Living Together. It is signed by him and the Grand Imam of Al-Azhar, Ahmad A-Tayyeb.

He shared with us the story and the discussions behind the scenes that shaped this famous document that brought them both closer to each other as brothers.

I mentioned that peace has to start in the family and thanked him for his statement that emphasized the family as a place of forgiveness. I shared with him that my wife is a devoted Catholic and Unificationist, plus a lector in the local parish, and I am a devoted Muslim and Unificationist; she is white and I am black; she is from England and I am from Sudan [the British colonized Sudan]. Therefore, my wife and I have a lot between us to forgive. He said of course it is difficult to forgive and I replied that forgiveness brings liberation, and he gently smiled. I told him that July 1 is our wedding anniversary. His face brightened, then with a look of surprise and a warm smile he said, “Happy Birthday.” We didn’t talk about the Blessing, although I added that my belief is that it is Jesus’s work that brought us together in marriage!

I asked him what can we do to help specially in regards to his ‘monthly intentions’ he said “Pray for me.” Actually he asked us twice to pray for him. What a humble man he is. Also as we were leaving he again said to us, “Happy Birthday!”

He spoke softly and joyfully. What a humble and loving man that he is!!”

Dr. Walsh is the Chairman of the Universal Peace Federation, as well as Chairman of both the World Peace Road Foundation and the Sunhak Peace Prize Foundation. Having earned his Ph.D. at Vanderbilt University, he has taught philosophy and religion at several universities in the United States. He is also currently the Co-Chair of the Board of Trustees of the University of Bridgeport. Dr. Walsh serves as Vice Chair of the International Council of the World Association of Non-Governmental Organizations and is on the board of The Washington Times.

Dr. Tageldin Hamad is the Chair of the World Association of NGOs (WANGO) and Director of the UPF Office for UN and International Affairs. He served as Secretary of the Executive Committee of DPI-NGOs at the United Nations and was Organizing Chair for the Summit of World Muslim Leaders conferences held in Jakarta and London. Dr. Hamad is Global Vice President of Sun Moon University in Korea.