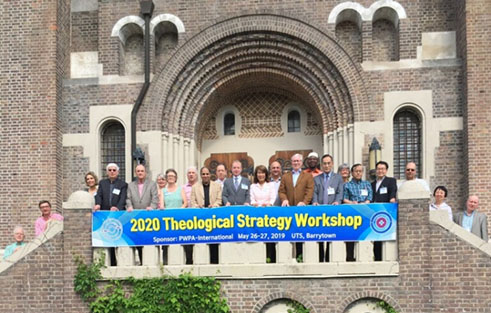 Twenty Unification scholars gathered over Memorial Day weekend, May 26-27, at the Seminary’s now-former main campus in Barrytown, NY for a “Theological Strategy Workshop.” The purpose of the gathering was to prepare for an international academic conference in conjunction with observances in Korea honoring UTS founder, Rev. Sun Myung Moon’s 100th year birthday in February 2020.

In its early years, UTS hosted dozens of theologian’s conferences which led to the publication of some thirty books from 1977-84 on various aspects of Unification theology. Part of this was due to controversy which surrounded the sponsoring church in those years. By 1985, UTS had spawned a number of ecumenical and interreligious organizations including the New Ecumenical Research Association (New ERA), Religious Youth Service and International Religious Foundation (IRF).

Numerous seminarians nurtured in these or later conferences went on to obtain their doctorates and serve on the faculty at UTS, in other capacities within the sponsoring church, or other institutions of higher education.

Dr. Thomas Selover (UTS’77), President of Sunhak Universal Peace Graduate University and International President of the Professor’s World Peace Academy (PWPA) convened the meeting. He ably navigated the presentation and discussion of sixteen papers over the two days.  Presenters were asked to prepare concept papers that honored Rev. Moon’s legacy for the present and future and rendered his contributions more accessible to the wider society, particularly academic society.

Topics included God’s existence, ontology, the problem of evil, trinity and Christology, universalism, praxis theology, revelation, angelology, co-creatorship and political philosophy. Several presenters attempted to look forward to the next 100 years as an opportunity not only for creative thinking but also as a way to impact the direction Unification thinking and practice takes in the future.