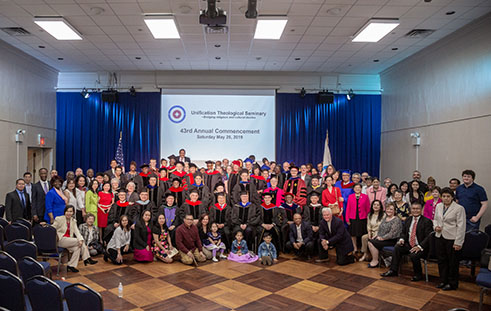 NEW YORK~ On Saturday May 25th, the Unification Theological Seminary (UTS) held its forty-third Commencement at the midtown New York City campus located in the 4W43 Building. Many friends, family and alumni gathered to celebrate the graduation and accomplishments of the Class of 2019. The commencement exercises were followed by a catered reception

All attendees were handed a program in which the words of the UTS Founders were featured prominently to introduce the spirit and vitality of the proud graduates and the whole event itself.

“The Seminary is not a place or a building; it is these people who are equipped with the spirit and ideal given by God… Armed upon graduation with a capacity for creative leadership, these students, I am sure, will be able to usher in a new world of higher dimension after removing society’s vicious social vices.”- Rev. Dr. Sun Myung Moon, Inaugural Address Sept 20, 1975

“Throughout history, our Heavenly Parent has guided human beings through religion. At this time in history, lasting peace also requires harmony and cooperation among religions. Believers of all faith traditions should work together in love and respect, for the sake of fulfilling our Heavenly Parent’s will. As we stand in front of God, we are not evaluated by our title or the name of our religion, but by the quality of our hearts and by the quality of our efforts to serve God’s providence…” - Dr. Hak Ja Han Moon, February 10, 2014

The 2:00 PM program opened with the singing of the National Anthem by Ms. Carla Mongado followed by welcoming remarks from Rev. Franco Famularo, Chair, UTS Board of Trustees and the Invocation by Dr. Andrew Wilson, UTS Professor of Scriptural Studies. Following the Invocation, Carla Mongado sang “You’ll Never Walk Alone” the second of her three musical offerings.

Dr. Ki Hoon Kim, Continental Chair of the Family Federation North America was then introduced to give the Commencement Address. After Dr. Kim’s perceptive and illuminating speech, UTS President, Dr. Hugh Spurgin conferred the degrees and offered congratulatory remarks, encouraging the new graduates to be leaders and kingdom builders as they progress to the next chapter in their lives after UTS.

Graduate Responses were offered, first, by Muriel Iturralde who moved the audience with her heartfelt expression of gratitude, even though she had had to face and overcome many personal obstacles.  She was followed by D.Min. graduate Gregorio Agulan, who echoed her sentiment. “Each one of us has our own share of imperfections. Throughout our journey, we are fueled by challenges and made to be stronger by problems and wiser by a conundrum of issues. But as what Dr. Robert H. Schuler used to remind us, “Tough times never last, but tough people do.””

Next, M.Div. graduate Dasse Diarra from Mali received the award for “making the greatest impact representing UTS outside the Seminary”. His surprise and bright smile matched the high spirit which filled the room; a high spirit which Carla Mongado maintained by entertaining us with her third and last song “For Good” ( a number from the hit musical Wicked).

The closing Benediction was offered by Dr. Lillian Miles Adjunct Assistant Professor of Ministry which brought the official proceedings to a close.

Graduates, family and friends continued to enjoy the afternoon with good food and conversation. Photos were taken. Congratulations were given. With the completion of the 43rd UTS commencement on 43rd Street, another milestone was reached in UTS’s rich and expanding history. 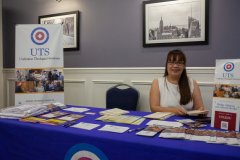 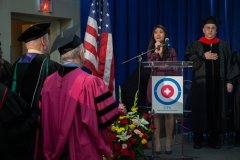 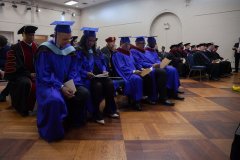 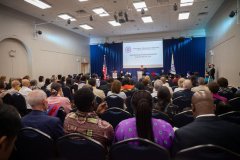 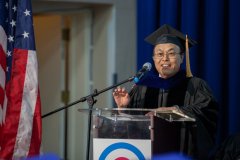 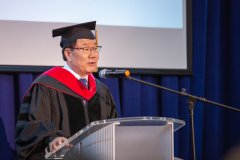 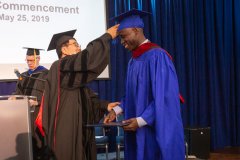 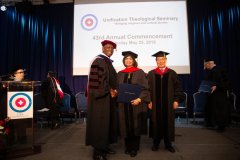 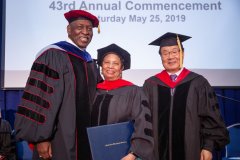 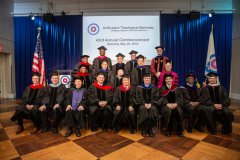 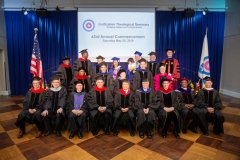 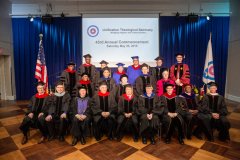 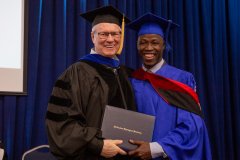