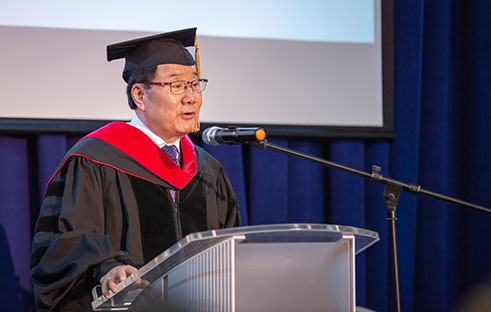 Forty-three years ago, our Seminary’s co-founders, Rev. Sun Myung Moon and Dr. Hak Ja Han Moon, led the first UTS commencement. The number “forty-three” has an important spiritual significance. From a Biblical perspective, it signifies separation from evil. In Exodus 12:40-41, it is written, “The length of time that the people of Israel lived in Egypt was 430 years. At the end of 430 years, on that very day, all the hosts of the Lord went out from the land of Egypt.”  “Forty-three” also refers to the completion of a cycle. “Four” and “three” together add up to “seven” which is traditionally a number of completion. I want to expand on these themes of separation and completion in my remarks to the Seminary’s 43rd class.

The world must separate from the evils of religious intolerance and sectarian violence.  In the year 2000, Rev. Moon called for the establishment of “a religious assembly, or council of religious representatives within the structure of the United Nations” to promote peace. His recommendation was not acted upon and in 2001, 9/11 occurred. Since then, there has been much religiously-motivated violence and terrorist acts.

During this school year, we witnessed tragic acts of violence perpetrated against houses of worship of Jewish, Muslim and Christian faiths. During Fall semester, on October 27, 2018, a gunman opened fire at the “Tree of Life” Jewish synagogue in Pittsburgh, Pennsylvania, killing eleven persons and wounding six others. During Spring semester, on March 15, 2019, a gunman opened fire at a mosque and Islamic Center in Christ Church, New Zealand, killing fifty-one and wounding forty-nine. Then, on Easter Sunday, April 21, 2019, a series of coordinated suicide bombings of three churches and three hotels in Sri Lanka killed 258 persons and wounded more than 500.

We must separate from these evils.

A fundamental purpose of UTS, expressed in our mission statement, is “to bridge religious and cultural divides.” The Seminary, represented by President Spurgin, issued statements after each of these tragedies, expressing grief over the loss of life and suffering. Expressing grief is entirely appropriate. However, we also must act. Here, I direct your attention to the work of our Seminary’s co-founder, Dr. Hak Ja Han Moon. At the advanced age of seventy-five, she is pursuing a global ministry of reconciliation and peace. She has named it a “Peace Starts with Me” ministry. 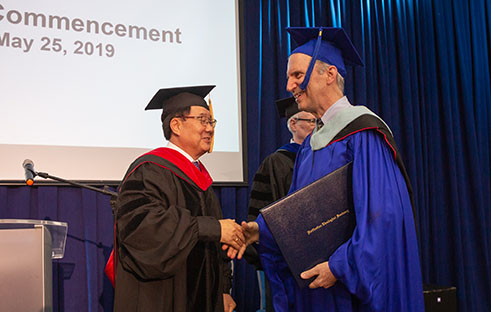 Two years ago, she convened a “Global Rally for the Peaceful Reunification of the Korean Peninsula” before 80,000 at Seoul Olympic Stadium. Last year, she convened an “African Summit” in Dakar, Senegal and traveled to Gore island, site of one of the continent’s largest slave-markets, to pray for the souls of those who were brutalized there. Many of you were at her “Peace Starts with Me” rallies at Madison Square Garden and Nassau Coliseum last November. Mother Moon continued her “Peace Starts with Me” ministry with a rally at the City of Refuge megachurch in Los Angeles on April 6. She spoke of principles of peace, care for the environment and concern for humanity beyond national self-interest. She also presided over a marriage re-dedication and blessing of 6,000 present as a statement in support of harmony and peace. She will travel to Las Vegas for a “Peace Starts with Me” rally on June 22, then to Chicago and Washington, D.C.

My hope and prayer is that UTS graduates will not only support our co-founder’s ministry but also work for peace in their ministries and bless marriages of their people. The Seminary’s mission of bridging religious and cultural divides has never been more needed than it is today.

I will address the theme of completion more briefly. Some of you may be aware that the New York State Board of Regents acted this month to make 4 West 43rd St the Seminary’s main campus. By the way, our new main campus address also contains the number forty-three! Even though UTS offered most of its Master’s course here since 2009, it now is official. UTS now will make its presence felt in the urban environment of Greater New York City. At the same time, the Seminary will reach out to the world through online distance education. UTS also will focus on raising a new generation of leadership. This is the focus of the Seminary’s strategic plan.

This year’s graduates are completing their study as UTS is completing a cycle in its history. Consider yourselves the final fruit of that cycle. Prepare yourselves to make your presence felt. Reach out locally and globally. Raise up outstanding new leaders. God bless you all and God bless UTS!