The Seder at Passover 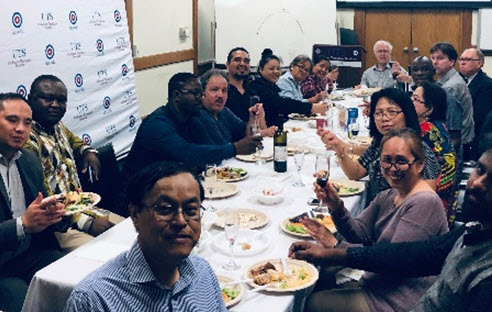 Passover is a Jewish holiday that commemorates the escape of the Israelites from ancient Egypt. A feature of Passover is a ritual meal or “seder” that refers to the very specific order which features different types of food for the purpose of telling the story of Passover. On April 22  a wonderful Passover service was conducted in the Oak Room of UTS, by Dr. Andrew Wilson, himself Jewish, and Professor of Scriptural Studies and Director of Scriptural Research. Dr. Wilson was ably assisted by Yael Kafir Zuker, an Israeli student at UTS. Those attending felt the sacredness of the meal that recalls the story of exodus from Egypt that happened 3000 years ago.

The seder began with students, professors and guests connecting to the sanctification of the evening by each holding a glass of wine, then reciting the blessings of “shehecheyanu,” expressing joy for the liberation of the Jews from their history of slavery.

Students read from the Haggadah, which recounts the story of the Exodus. They performed the ritual of dipping parsley in salt water, which symbolizes the tears that were shed during the slavery in Egypt. They ate bitter herbs (horseradish) to commemorate the bitterness of slavery. They enjoyed the flat Matzah, which recalls the Jews' rush to depart Egypt when they had no time for their bread to rise.

Traditionally the youngest child recites the "Four Questions," which ask “Why is this night different from all other nights?” This was handled ably by our Librarian who brought his young son with him to the Seder.

The participants also joined in the ceremony of removing 10 drops of wine from their glasses, evoking the hardened heart of the pharaoh during the time of Moses that caused God to send 10 plagues to force the pharaoh to release the Israelites from their bondage in Egypt. The lamb bone was raised, symbolizing the blood that was smeared on the lintels of Jewish homes so that the angel of death would "pass over" their homes when he went about killing the first-born of the Egyptians.

The Passover evening was concluded with everyone singing a fun song called “Dayenu”, meaning “It would have been enough.” Then we all enjoyed a feast prepared by our Filipina students.