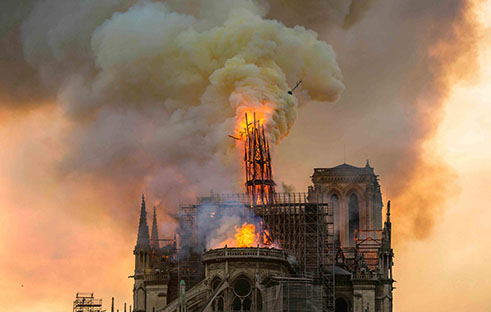 Easter Week: Monday,15 April 2019. Evening 6:20 pm Notre-Dame,Paris, caught fire and subsequently the roof and spire were consumed by flames in a blaze which lasted 9 hours.

The construction of Notre-Dame mostly ran from 1160 to 1260. Caroline Bruzelius suggests Bishop Maurice de Sully initiated work on this new cathedral but substantial work remained including the construction on the flying buttresses which were completed by Raymond du Temple around 1363.[1] The buttresses countered the weight of the roof which pressed downward and outward to the walls so buttresses allowed higher, thinner, walls which could also sport much larger windows.

Regarding the architecture there are a number of historical markers to consider including works from Plato, Pythagoras, Euclid and naturally biblical references which oﬀer, one as a symbol for God, two as the duality of creation, and three for the Trinity, but it gets more complex than this when considering the structure of the temple in Jerusalem and the size of the Ark (Gen 6: 14-16) which oﬀer both numbers and geometry.

Moving to the time period of the great Cathedrals we find the idea of “Perfect Numbers” which were valued in the Middle Ages and became a predominant interest.[2] This idea of perfect numbers is founded in Biblical resources and taken from Euclid’s Elements / Divine Proportion 300 BC[3]; and it is this which supports the idea that the Gothic Cathedral represents a model of the cosmos - the creation, meaning order and harmonious arrangements throughout. There was, in fact, a Platonic school in Chartres[4] where it was said God was the ‘elegans architectus’ who constructed the universe and ordered it as the divine geomancer. Others of the time supported the arrangement of all things by measure and by weight in this way so the Cathedrals became a true symbol of the cosmos itself, as Solomon’s Temple had done before.

Such traditions continued through Boethius in his ‘De institutione arithmetica,’ St. Augustine in his ‘De covitate Dei,’ Bonaventura in his ‘Itinerarium mentis in Deum (1217–1274)’ and others who the architects and builders of the Cathedrals referred to. Hugo of St. Victor 1078-1141, in his Didascalicon, cites the number of historical epochs then moves on to the ark noting its 50 cubits of breadth and its other geometric proportions. St. Thomas Aquinas touches on aesthetic beauty when he says that, “pulchra enim dicuntur quae visa placent”, ‘beautiful things are those which please when seen’.[5] Here he is suggesting in the Scholastic period, the blessed see the essence of God through the human senses and in this way we come to know God. Such thoughts were in the air at the time.

Plotinus made heavy use of similes of light to explain his system of emanation, as visible light was the most accessible example of emanation. Thus, the One emanates its essence, like the sun emanates light, and fire emanates heat. Light provided a link between the physical and the metaphysical, between image and archetype where archetype would furnish us with patterns and dynamics common to many things in creation as archetypes lay in the mind of God according to Augustine[6] but more pragmatically this included architectural form and the processes of building, which gave rise to cathedrals. Archetype then becomes pattern and dynamics. Nevertheless, by the thirteenth century, these similes and linkages were transformed and light became the actual substance of creative emanation common to both theology, architecture and the metaphysical propositions tied to faith.

Pseudo-Dionysius the Areopagite denotes the radiance or splendour of light emanates from the ‘Father of the lights.’[7] This insight is repeated by Abbot Suger in his description of the rebuilding of Saint-Denis 1137 and in the inscriptions he had placed throughout the new church. He is regarded as both friend to the French king and the main patron of Gothic architecture. He is highly relevant to the period of which we speak and to the pervasive brightness of the new church represented by Saint-Denis, Chartres, and Notre Dame.

If the Gothic church was to be a symbol of the new creation, redeemed and ordered by Christ, then it had to have beauty, and thus, it had to have integrity, harmony, and brightness. These three elements are central to the form of the Gothic cathedral. The perfectly harmonious structure of the Rose windows in Notre Dame are mandala-like in their geometry and present a unifying symbolic core represented by male and female and Virgin and child.  As such, the window presents a metaphysics of light which points to the centrality of God’s creative nature as a source of all emanations and the wholeness of a true self-created by this same God of fecundity. Hence the processes of individuation, the development of a true-self, dynamics taking place within the self which bringing it to fruitbecome a central tenet. Indeed, the epoch of these great cathedrals relates directly to their function of ‘bringing heaven down to earth’ in a tangible way and thus creating a divine space where the soul might come to contemplate spiritual renewal after a challenging period in church history.

The dates of the European cathedrals run through the period of the Divided Kingdom and through the period of Papal Exile and Return defined in the Exposition of the Principle. The return from exile comes about in both the earlier Judaic period and this later Papal exile and return from Avignon relevant to the genesis of Notre Dame and other cathedrals.These are parallel events, Judaic and Christian, both marked by a call for repentance and renewal so in the first case a return from the Babylonian exile led to a foundation of faith symbolized by the rebuilding of the Temple (EDP, 1996. p 326 / the Parallels start at p 313). The cathedrals of Notre-Dame and others, such as Chartres starting in 1145, which sprung up in France held to a similar design, methodology and internal and intrinsic meanings of transpersonal numerology and a spiritual rebirth.Abbot Suger 1144 had given impetus for such works and supplied his passion for Gothic masterpieces to rise from the good earth.

The metaphysics of light played its part in this. Hence the ‘divine radiance,’ this brightness, should lead visitors to the church to contemplate the science of light foremost in studies of the time and the proposition of emanation which might illumine the soul of those called to consider their inner world. Something of science and faith came to prevail in this epoch.

Additionally, the roof was constructed from oak beams cut from local forests some thought to have dated back 850 years to the original construction dates but under this frame, the interior ceiling held to stone ribbing and small blue intervals of roof decorated by fleur-de-lis symbols. It is thought the oak paradoxically contributed largely to the fire yet nevertheless the interior columns plus the ribbing in these vaulted ceilings related to the nature of a forest where trunks soared above to become overarching branches and in between all this a glimpse of the starlit heavens beyond presented itself. Math, proportion, aesthetic beauty, and light suﬀusing the interior through stained glass rosary windows set the atmosphere for the aesthetics and metaphysics of Divine Proportion, sacred architecture, and thus they became hallowed sanctuaries with a concern for the future return of Christ and the kingdom into our world; a profoundly aesthetic proposition which brought Logos down to ground.

Many in Paris openly wept in the streets as their cathedral burned on that day, many round the world felt something deeply and responded accordingly, and many knew nothing or treated the event with jokes or derision. But for those who felt something, as they might also through Easter, it provides an opportunity for a renewal of faith, just as the cathedral is now facing renewal, and for us perhaps, a re-commitment to the love and aesthetic beauty God always provides us with. 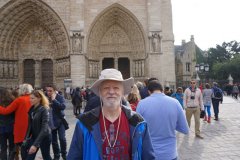 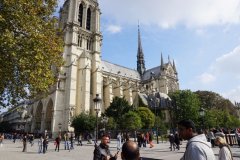 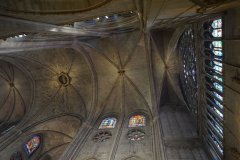 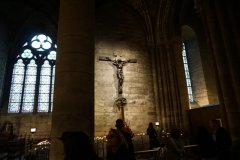 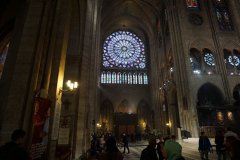 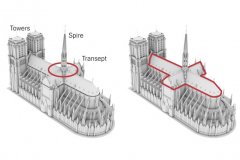 Derek Dey (UTS’87) a native son of Aberdeen, Scotland, received a BA in Fine Art from Grays School of Art, Aberdeen and a Master of Religious Education from UTS. He lives with his family in Denmark. He is an artist and photographer, and he writes and lectures on Psychology, Art History, Art Theory, Aesthetics and Ethics.

[3]Euclid, Elements, Book VI and Book II, Theorem II. NB The Golden Ratio/ Golden Mean / or Golden section is also taken by some to the term divine proportion and is proposed as being aestheticaly pleasing. It is likewise connected to the Fibonacci sequence Book two is often ascribed to inspiration from Pythagoras. Pythagoras also entertained mathematical propositions which maintained the entire cosmos moved to mathemmatical equations - to the harmony of the spheres. These transpersonal models or propositions were well respected in the Gothic period when the European cathedrals were constructed.

[6]Archetype is related to the Image of God and is a term used widely by CG Jung in his psychology. His Christ archetype becomes the pattern of the self. The reference to Augustine is one source but others such as Philo, Dionysius the Aeropagite and the Platonic Eidos postulate the term and meaning of the archetype. Essentialy these archetypes are patterns from the mind of God which constitute plans and images for the whole creation. Augustine speaks of ideas of principle contained in the divine understanding - this is found in ‘De divinis nominibus LXXXIII.’