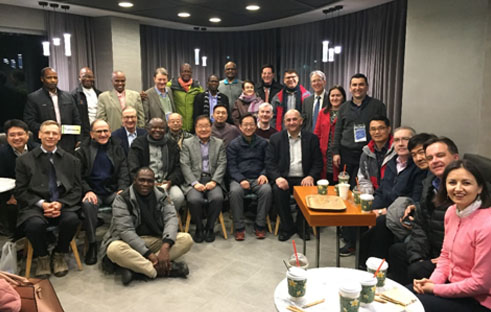 UTS alumni from around the globe gather at the HyoJeong Cafe

At the invitation of Family Federation International Vice President Dr. Ki Hoon Kim (UTS’96 ), Rev. Franco Famularo (UTS’94), Chair of the UTS Board of Trustees, gathered some 35 Unification Theological Seminary (UTS) alumni for a meeting at the HyoJeong Cafe on the HJ Cheonwon campus of the Unification movement, some 35 miles outside of Seoul, Korea. The event took place on the evening of February 13.

The participants were Unification movement leaders from throughout the world who had gathered for the movement’s International Leaders’ Assembly on the occasion of the celebration of the UTS Founders’ birthdays and the sixth anniversary of the movement’s Foundation Day.

The meeting went nearly 90 minutes. Welcomed by Dr. Kim’s sincere and inspiring greeting that set the tone of openness and positivity, participants were engaged, constructive and passionate. One expressed that the UTS experience changed their life, and all murmured agreement. Others noted how a large number of international Unification leaders are UTS grads. We were aware that the group that could gather represented a fraction of the many UTS alumni from Korea and Japan in the area, who had other schedules, and those who were leading the Universal Peace Federation (UPF) inter-religious and international conferences, and the International Conference on the Unity of the Sciences (ICUS) and “God-Science” conferences, in Seoul. 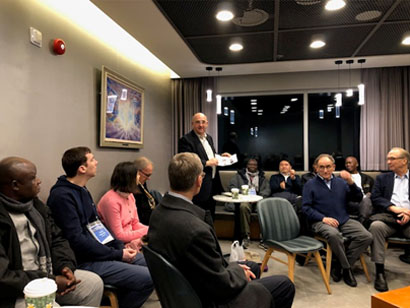 Rev. Franco Famularo (UTS’94), Chair of the UTS Board of Trustees addresses the alumni

Rev. Famularo invited Dr. Kittel to give the opening prayer, and then Dr. Ki Hoon Kim to give opening remarks. Dr. Kim pointed out the great financial investment that True Father, and now the American Unification movement, has made in UTS, and that we need to see the real results of that investment continue and multiply at this time.

Rev. Famularo pointed out that the great value of UTS is that it is an accredited American degree, which is recognized throughout the world.

The Albanian leaders present lifted up the value of the online courses on Divine Principle, True Parents life and teachings, Islam, pastoral leadership and true family values. They noted with gratitude that without the online presence, and the scholarship support of both UTS and European HQ, this education would be beyond their reach.

Alumni in general stated that UTS made a tremendous difference in their lives and that all Unification leaders benefit from and need to have a UTS education.

Rev. Philbert Seka voiced concern for a lack of placement services. People graduate and have no employment opportunities. In discussion, we realized that subsequent employment is more the responsibility of the Unification movement than of UTS. Nonetheless, UTS needs to cooperate with the movement on this task.

Albanian UTS-Online students stated that they all have full-time missions and it is very, very difficult to finish the online courses in eight weeks. Some have to drop out because of time pressure. They request longer terms for online classes. The same request has come from American UTS-Online students who were not at the meeting. They request that the courses be taught over twelve weeks.

Another solution that came up at our meeting could be to provide 2-week on-site intensives, with the students being granted those two weeks of time off from their work/mission positions. African leaders in particular encouraged the implementation of on-site 2-week intensives, and stated that they could recruit many students.

It was pointed out that online teaching is not a total solution for some regions, due to lack of Internet service (Africa) or government restrictions (Middle East). 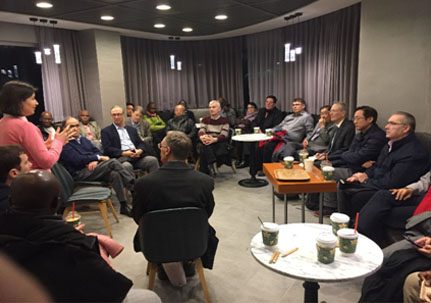 Some alumni argued that UTS education is for movement leaders, and therefore the solution is simple: the Unification movement should require that young pastors attend UTS and provide them the scholarship support necessary for them to do so. We all know that this was exactly the Founder’s practice.

It was pointed out that just as Father Moon strongly promoted UTS, there is a need to invest more in marketing. Also, that education of the Unification movement’s leadership is a global issue and should be approached with a global perspective by the global level leadership cooperating together.

So, it was a constructive and practical discussion. Dr. Kim closed by proposing that this international alumni gathering take place twice a year. It was great to mingle among generations of students from over the decades, from the second graduating class to current UTS-Online students. Continents, races, nations and different religious backgrounds, were united by True Parents’ love, sharing our UTS experience in common. All expressed their gratitude to Dr. Kim for organizing this meeting, and were in agreement to convene again every Foundation Day and Seonghwa Anniversary, when UTS alumni gather in Korea for international meetings.

Dr. Tyler Hendricks (UTS Class of 1978) is adjunct professor of ministry at Unification Theological Seminary, host of True Parents Way website, and a member of the Cheon Il Guk Academy. He served in leadership roles with International One World Crusade, Ocean Church, American CARP, the International Religious Foundation, and HSA New England Region before becoming President of the Unification Church of America (1995-2000) and of Unification Theological Seminary (2000-10). His podcasts, videos and articles appear regularly on True Parents Way.