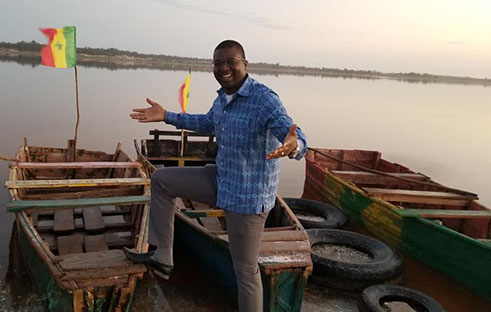 It is almost guaranteed that whenever you have two or more people in a relationship that sooner or later there will be conflict. Multiply this conflict from couples or co-workers, to families, tribes and nations then you have a recipe for misunderstandings - possibly on a global scale. Beyond harsh words and bad feelings, physical confrontation can happen as things escalate. Even without a fist fight or war breaking out, the resulting emotional fall out is devastating for everyone. Dr. Idris (Drissa) Kone, has been working at the forefront of peace making since 2012 when he received his Master of Divinity degree from the Unification Theological Seminary (UTS). Through the application of proven methods to address conflict and restore frayed relationships, Dr. Kone is offering skills that can make peace a real possibility.

In many respects, Dr. Kone is uniquely positioned to offer peaceful solutions to conflict. As a native of the Côte d'Ivoire (Ivory Coast), he has personally experienced civil war in his native country and has witnessed first-hand the damage created by political and religious strife. Originally from a Muslim background, Dr. Kone became a Unificationist in 2003 so he is well-versed not only in the Islamic faith, but in the spiritual traditions of Christianity and Unificationism.

Over the past few years he has developed a vision of how to create a positive impact on African nations through education. With an MA degree in Diplomacy with a concentration in International Conflict Resolution, and an M.Div. and doctoral degree from UTS, Dr. Kone has fully invested himself in being a peace builder. His educational background and research is focused on methods of preventing and healing conflict through personal development. Through frequent visits to Africa he has been steadily working to bring his vision to fruition.

Earlier this month, Dr. Idris Kone was invited to Dakar, Senegal by the Professors World Peace Academy (PWPA) to share his knowledge and experience in both conflict resolution and personal development.

“I was originally scheduled to do a two-hour presentation on the Principles of Peace, but unfortunately due to delays I missed my connecting flight.” Not one to be defeated by wayward airplanes, when Dr. Kone was at the conference in Dakar, he took the opportunity to have a lengthy dinner meeting with a group of professors and facilitated a discussion about any difficulties the professors were experiencing as educators. “During our dinner meeting I asked the professors what were the most challenging issues they dealt with. Across the board the professors all lamented that there is a moral crisis amongst the students that they are teaching and they are in a quandary about the best way to address this issue. I spent a lot of time listening and asking the professors how they thought they could find solutions.”

Additionally, most African nations are still dealing with the aftermath of colonization. “Senegal, like many other Africa countries, is very much influenced by the West. Because so many countries in Africa were colonized there is an inheritance of both bad and good. There has been a huge change in the local culture. Students and people in general are being constantly bombarded with internet, TV and movies from the West; people are very influenced by media and it isn’t always good.” But Kone is determined to be a trailblazer to influence change in his native country of Côte d'Ivoire and perhaps Senegal and other African countries as well.

During Kone’s doctoral research one of his major findings was that people who easily enter into conflict with others also have a difficult time forgiving; they clearly lack the skills it takes to resolve conflict effectively. “Fundamentally, despite good intellectual or technical training, people still have problems in terms of personal development. It is really a challenge to know how to respond emotionally when being attacked verbally, for example. It is easy to hold on to resentment and anger especially when a person is struggling with their perceptions of other people which may not be accurate.”

Dr. Kone is currently creating university level curriculum that will eventually be offered as a course to both undergraduates and graduate students at the University of Cocody in Abidjan, his alma mater. “I want to equip students to handle conflicts successfully; maybe they will be working in a team – people coming together always experience some level of conflict. How can the conflicts be resolved? Hopefully the course I am creating will concretely equip students in the work place and beyond.”

Dr. Kone outlined his approach, explaining that the training involves three steps; the first step is prevention; people need training to learn to focus and communicate well with others. Says Dr. Kone, “A person has to develop the skill to listen well, perceive people accurately and use certain principles to help prevent miscommunications and misunderstandings. Realistically, however, you also have to have allow for failure, too. This is where step two comes in: people need to be trained in crisis management.  When someone is angry and shouting – then you need to have effective crisis management. When that fails and people get physical you may even end up with police intervention! The third and last step is healing. What is the process you need to use to rebuild the relationship?” All of these steps are fleshed out in Kone’s personal development training.

In June of 2019 Dr. Kone will teach students about personal development and conflict resolution at the University of Comody, Côte d'Ivoire. “I will be giving the training as a seminar so I will be teaching over one or two weeks, two to four hours per day.” Kone’s hope is that the curriculum he is developing will be used as a course taught to third year undergraduates as well as second year graduate students.

“Students who later become employed or perhaps create their own businesses will be sent a survey after a year as a follow up to see if they have been able to apply the skills they have learned within their work lives. Did they face a conflict in their work? Were they able to successfully deal with conflicts?” When Kone’s research is complete, he will use the data collected through the surveys to measure the outcomes – and hopefully the success – of what the students have learned and then he can make further recommendations to the university. 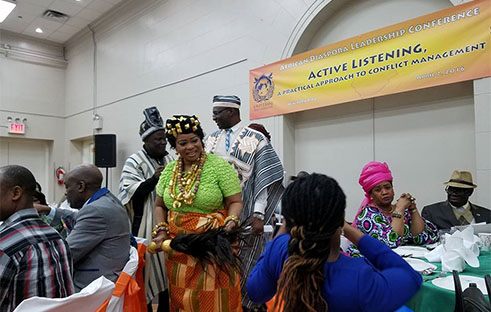 The coursework is not just theoretical. According to Dr. Kone, “As part of the training we use real case studies. The participants have to take on different roles – as the leaders or representatives of people and then others represent the opposing party. The participants have to create real solutions to the problems.”  Dr. Kone monitors the process, “It is a real situation – the only difference is they have to work it out with the opposition; they are both rooted in their position, but they have to negotiate a solution. Active listening, conflict resolution – all the skills they are learning have to be put into practice.”

Kone also anticipates that professors themselves will also participate in these trainings. “The PWPA professors, for example, are very high level and working in all the areas of social science. They are in a position to publish papers and articles as well as lead conferences and programs that can promote peaceful solutions to conflict. That was my purpose in traveling to Senegal to meet with the professors there.”

Dr. Kone’s work is very much needed. “The negative influences, and aftermath of colonialism is ongoing.  Economically, Africa is still struggling to find its way. In West Africa the currencies are still made in France – the countries aren’t even able to print their own money.”

As part of his recent visit to Senegal, Dr. Kone toured Goree Island, the gateway to the Atlantic slave trade. “Being there is really a moment of intense reflection. When one considers what happened there for several decades… the breaking up families…  when you go to Goree Island with its Door of No Return, the jumping off point for the slave trade, it is an experience like nothing else. Guides tell you the stories of what happened there. It is certainly not a joyful experience for any African. There was so much suffering – the emotions one feels are impossible to convey in words; it is such an intense experience.”

Much healing work is still needed to be able to create true peace. Stateside, Dr. Kone has also worked with many people from the African diaspora. “The difficulty is that often people coming to the United States bring their unresolved emotional baggage with them; there are still ongoing conflict issues, for example between Muslims and Christians, or between different tribes. These need to be resolved and healed.”

Dr. Kone shares an experience he had with a student who received his personal development and conflict resolution training. “This student implored me to teach these principles and skills to the leaders of African nations. It was so abundantly clear to this young man that this training was needed at the highest levels. I’m confident that some of my students will become politicians or leaders of educational institutions. With this training in personal development they will be able to concretely offer skills that can both support and sustain peace. It is my hope and vision that they will use this knowledge to help lead the Côte d'Ivoire and other African nations on the pathway to peace.”

Giving back to the Ivory Coast