Secularism vs Religion in Turkey 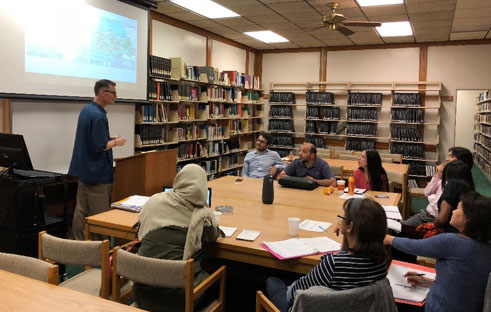 The foundation course World Religions and Global Conflict [1] recently launched a dynamic discussion when Turkish speakers were invited to speak to the class. In Fall 2018 at the UTS campus in New York, our three guest speakers discussed and shared their experiences about the chaotic and convoluted relationship between the Turkish Government and its unofficial state religion - 98% of the population is Muslim. Turkey is one of the countries experiencing a struggle for dominance between secularism and religion.

The first guest speaker in our class was Engineer Suleyman Aydogan, a Muslim from Turkey and executive director of Peace Islands Institute in New York. He reported about the many examples where government institutions are separated from its religion-oriented culture. Turkey’s current President, Recep Tayyip Erdoğan, has recently been witnessed promoting religion as the basis for state law and the common denominator in politics.

The second speaker was Imam Ibrahim Etasoy, also a Muslim Turk, who voiced his concerns for the thousands of Turkish citizens who have been suffering and have endured arrest, abuse, persecution, abduction, and torture for being Hizmet sympathizers. This crackdown resulted in the deaths of hundreds of civilians who were accused of attacking the Erdogan government during the violent coup that took place in Turkey on July 15, 2016.

The Imam lamented about Erdogan’s persecution of the people who Erdogan saw as a threat to the stability of Turkish democracy. Erdogan blamed Gulen’s movement for the unrest. Fetullah Gulen, one of the most distinguished scholars in Islamic history, was accused by Erdogan as the mastermind of the coup that resulted in the Turkish Government’s mass crackdown since 2016.

Our class discussion learned that conflicts all over the world are not only wars between country and country, or religion versus another religion, but also originate within the same faith and the same region. Conflicts can stem from political, cultural and material deprivations. Our class has identified that sectarian literalism can lead to violence because of a resistance to diverse point of views in life. At any moment, a division can emerge which leads to the violation of basic human rights.

We had the opportunity to hear a third speaker, Mehmet Kilic, a journalist, who presented us with several aspects of the Hizmet mission in advocating peace service expressed as: “Many ways of serving God”. This also gave us an understanding and sympathy for the ongoing crisis in Turkey. Kilic is the main representative to the United Nations (UN) for  the Journalists and Writers Foundation, which advocates for increased education to reach the UN’s Sustainable Development Goals; he is also vice-president of the Turkish Cultural Center (TCC). Kilic communicated the vision and mission of the TCC organization, which is an extension of the Hizmet methodology of integrating Muslim activities into society by sharing cultural and religious practice with others. One of the TCC programs is an Interfaith Dialogue that promotes collaboration and understanding of other’s faith perspectives. From his contribution, our class has learned that what the Turks need right now are programs that will foster peace through the continuous effort of educating the public, and to overcome ignorance by providing the clear truth of what is going on within the Turkish social system and its governance.

Some key questions were left with us as a class: Will we ourselves be able to provide help by being an ally to support Gulen’s objectives and its principles? As interfaith students at a seminary, what can we do to help the Turkish people who are accused and persecuted?

The course World Religions and Global Conflict helps us to analyze the complex interplay within religions and cultures which can lead to unrest and conflict in a country like Turkey, as well as in other parts of our world. One of our great realizations from the presentation on Secularism vs Religion is that it gave us an insight on how to discover and identify the causes of conflicts in past history and in our contemporary world.

Watch: Love is a Verb

[1] LTR 5513 World Religions and Global Conflict: Utilizing a case-study approach, this course examines conflicts around the world and the role of religion in causing, exacerbating or ameliorating them. In seeking to understand religion’s role, students will examine comprehensively the religious, historical, political, economic, cultural and social background of the crises. Particular effort will be made to spotlight religiously grounded activists and leaders who have made a positive difference. 3 credits