Theological Developments in the FFWPU since the Death of Rev. Moon 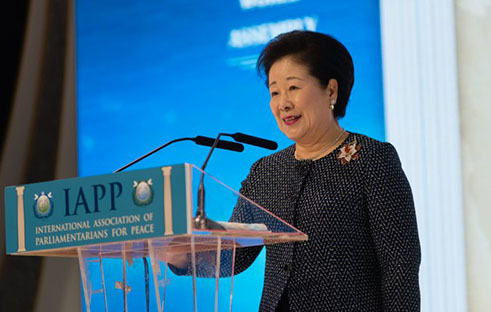 This article by Dr. Andrew Wilson is adapted, with permission, from the author's paper published in Acta Comparada, Subsidia VI, FVG, Faculty for Comparative Study of Religions and Humanism, Antwerp (2017). Dr Wilson's paper was first presented in a conference held on May 29-30, 2017  in Antwerp, Belgium on The Life and Legacy of Sun Myung Moon and the Unification Movements in Scholarly Perspective.

In his article, Dr. Wilson explores Mrs. Hak-ja Han Moon’s effort to assert her leadership and put her particular stamp on the Unification movement. Known as “True Mother,” she is emerging as an institution builder, in contrast to her husband the visionary. If one likens Rev. Sun Myung Moon to Joseph Smith, then perhaps Mrs. Moon can be viewed as the movement’s Brigham Young.

She has faced opposition, because while both Rev. and Mrs. Moon have the theological status of True Parents, in practice members of the Unification Church made Rev. Moon, whom they regard as the Lord of the Second Advent, the focus of their devotion. There had been little reckoning with the prospect of his passing, or how they would regard the leadership of his widow, who today is regarded the remaining True Parent on earth.

Mrs. Moon has made it her mission to clean up all the loose ends that remained after Rev. Moon’s passing in 2012. Before he died, he had already completed the fundamental task for which he was called: to establish the foundation for a world without the Fall where God is sovereign over all. He had hoped to see the substantiation of that world on earth, specifically the “restoration of a nation” and the reunification of North and South Korea. At the time of his passing, many members were disheartened by the fact that these external goals had not been accomplished. Not Mrs. Moon; she fought through her grief and took up the torch to continue the struggle.

Mrs. Moon has called the FFWPU to make an all-out effort to achieve these goals by the year 2020, the 100th anniversary of Rev. Moon’s birth. Today the membership is striving to fulfill her instructions, spreading the marriage Blessing in “strategic nations” where prospects for national-level buy-in to the Unificationist project are brightest. She anticipates an event in 2020, possibly in North Korea, which will enable her to declare before God that True Parents have completed their missions on earth. At the same time, she is actively recruiting second and third-generation members in their 20s and 30s for leadership positions, in order to assure the survival of the FFWPU for decades to come.

Dr. Andrew Wilson is Professor of Biblical Studies at UTS. His publications include World Scripture: A Comparative Anthology of Sacred Texts (1991), World Scripture and the Teachings of Sun Myung Moon (2007), and True Family Values (1996).