See you later! - An Insight into a Student's Life 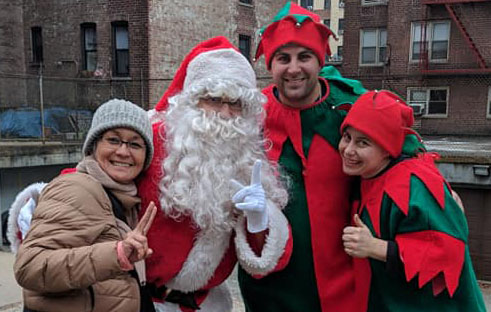 Vanette meets Santa and his elves.

It was almost 8:00 pm and I was cleaning the kitchen after making a sumptuous dinner for my billionaire female boss, at her summer home. I came a few hours earlier to prepare it, and did some chores. The security person on duty for the night came in and looked me straight in the eye with a pensive look. “Is this your last day?” With a serious yet naughty look, I said, “Yes it is.” And then he hugged me.

Four years ago, I began employment as a caregiver to one of the richest men in America At that time, my job was easy because I only requested to work part-time, on weekends. My task was to accompany him and his wife while they went around art galleries in Manhattan. With a point of a finger, paintings, no matter the cost, would land in one of the houses which the couple owned.

Needless to say, it wasn’t long before I had difficulty fulfilling my duties. You see, every time we went on walks in Central Park or to an art gallery, my boss would hold on to my arm. His medical condition meant that his legs were getting weaker, and with him holding on to me, it became an ordeal. So I was let go as the caregiver, to be replaced by Filipino male caregivers.

I had wanted to quit earlier, but I have always had difficulty handing in my resignation, especially with nice employers such as the missus. Instead, she asked me if I wanted to be a housekeeper for their summer home. Since it was the same pay and benefits, I said I would try. Later on, my job became that of a personal chef, since the housekeeping was given to a local resident at the summer location. 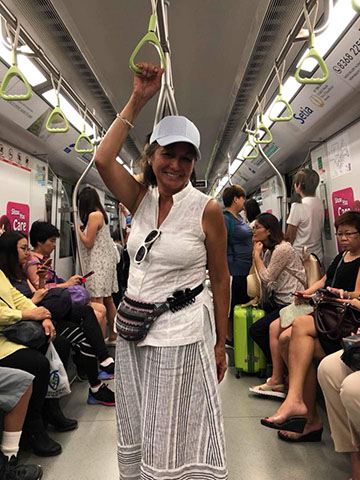 The death of a mogul moved the publishing industry and it was the only time that I was aware of his stature and magnanimity. In spite of the tribute given him to “celebrate his life,” the missus remained humble and modest in all her ways. During the event, we (the house staff) were the silent onlookers amid the crowd of successful business people, well known celebrities and a “select few” who were invited. At that time we were on an equal footing with the guests, and no less.

My pastor once said, “If you want to know the character of a person, ask his family, his housekeeper, and those that are within his inner circle. They know it all.” And I truly believe that.

When people stay as an employee for a decade or so it shows something of the character of the employer. And my boss has that kind of quality, with some of her staff employed for as long as 3 decades and more.

I take off my chef’s bandana and apron, shove them in my backpack, and I start towards the living room where my boss is fidgeting with the remote control for her evening movie night. “Am off, Mrs. N., thank you so much for everything, and I mean everything.” I hug her and she kisses me back. “My doors will always be open for you, and please call me if you need anything.” I say. She answers, “My doors will also be open as well, please keep in touch always. And thank you.” She smiles back and I turn to leave for the door. No tears, just a sigh of relief and gratitude to have served someone great, yet humble with such grace.

We do not close doors, we just say, “See you later.”

Vanette shared more with UTS Communications about her unusual life.

1. What do you enjoy most about studying at UTS?

The interesting subjects, teachers and the students.

2. NYC is a unique place. What do you like most about living and studying here?

Living in the city has its diversities which I love….and studying in UTS allows me to engage people of different religions and differing views.

3. Have you been able to take advantage of the variety of venues offered to the public... such as the world-renowned theaters, museums, and art galleries, for example?

I do have my fair share of exposure to many of the venues…but you can never have enough as it is so much.

4. Tell us about your classmates

5. Which degree are you taking? Why that one?

MA in Religious Studies (Non-profit Leadership concentration). That’s because my desire is to start a foundation, or to establish a non-profit, which is on my bucket list.

6. How is UTS preparing you for future career opportunities and employment?

My project is to start a farm with a focus on agri-tourism located in my home country, the Philippines. The courses such as Entrepreneurial Ministry and Principles of Marketing are preparing me for that. As a matter of fact, I have already crafted the project proposal for my family as a joint venture, and they are more than willing to be part of the project.

7. Would you recommend UTS to your friends and family members?

8. Are you able to balance your work with your studies?

I work from home now. So yes, I am able to balance work with my studies.

9. Where did you study as an undergraduate?

I studied at an exclusive girls’ Catholic school from Kindergarten to College: St. Theresa’s College, Cebu, Philippines. But I took a one year Masters in Business at the University of the Philippines in Cebu.

10. Which undergraduate degree did you earn?

I earned a Bachelor of Arts degree majoring in Accounting

11. Tell us about your family and growing up in the Philippines. The culture, lifestyle, and food.

I grew up in a comfortable home, and studied in an exclusive catholic school. My mother came from a very prestigious family, and my dad was a successful businessman who was always away on trips. The downturn came when they separated (there is no divorce in the Philippines). I was 11 years old. We all lived with my dad. However, when I became a teenager, my maternal grandma said I had to live with my mom, so I did. I led a sheltered life with my mom and grandma looking after me.

My first real boyfriend (and now my husband) came when I was 16 years old. My family approved of him because our parents came from the same exclusive school too…So we were sort of familiar. My maternal grandparents had a huge property so when my mom separated, they built a 2-bedroom house for her near the ‘big house’.  Although I slept in my mom’s house, I had all my meals with my grandparents.  I lived a comfortable life with many housemaids, a cook, a laundrywoman, cleaning ladies and gardeners—looking after 2 family homes. Moreover, my mom had a vineyard where she grows grapes which was her livelihood at that time.

I got pregnant and then married at 21. Since we were not settled yet, and we both had to finish our college degrees we lived with my in-laws.  Hubby had to finish his architecture degree and I had to finish my accounting degree.  It was the only time that I experienced any sort of discomfort, because I was used to having housemaids. Living with my in-laws and my hubby’s 9 siblings all in one house, we had to fend for ourselves. They only had one housemaid who did the laundry.  I only learned to cook observing my mother-in-law, who had to be creative to feed 10 children with a modest budget…Needless to say, when I would ‘experiment’ with cooking food, my hubby would then say, “Not like my mom’s,” which sort of pained my ego. With my personality, I do try to accomplish. Ten years later, during a family gathering, my mother-in-law brought one of her dishes which happened to be the favorite of my hubby. When he tried it he then said, “hmmm…my wife makes better.” Then I said to myself, “I finally succeeded in cooking!”

If I were to write a book about my life, the title would be “From Riches to Rags with Style”. That’s because when others start from the bottom working their way up, in my case, I had it all…good family background, even if my parents were separated, my support system from both sides of the family was very helpful.  We had our own export business. I had my own bakery business, and I did catering as well. I was a businesswoman and travelled because of that. Growing up during my school years, I was a Catholic, but after 10 years of married life, I became a fundamental born-again Christian.

Needless to say, in a nutshell, one day, I was so stressed with business life and just wanted to get out of the rat race. We were doing mission work, and there were foreign missionaries that came to the Philippines.  At one point, I asked if one of them could get me a job in the United States. When the opportunity arose, I left. I started at a desk job, then worked my way down meaning, from being an agent at a call center, to an assistant in an elderly facility, then caregiver, a nanny, a housekeeper, and now I am a student. Talk about demotions in the career path! This was it, but it has been the most fulfilling time of my life. It has helped me find ME.  But it does not stop there, because when I am done with my studies, I shall dedicate myself to being a farmer the most important career (I think). How else can one live if one doesn’t eat? And where is the source of food? On a farm. Anyway, so that’s the story of my life in a nutshell.