My Class, Classmates and Religion 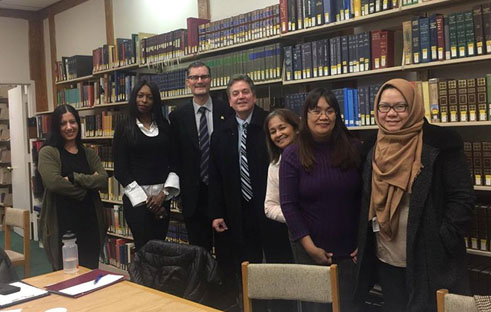 World Religions and Global Conflict class. Yael on the far left, Famidah on the far right. Vanette in the all-white shirt. Dr. Chesnavage in the middle (wearing glasses) with Don Plunkett next to him.

Two more meetings and the semester is over. Taking up inter-faith subjects at a theological seminary is like jumping into an ocean. You just don’t know what to expect until you swim in it.

The World Religions and Global Conflict class is one I look forward to every week, because of the diversity in the study of religious clashes. Additionally, my classmates come from different religious backgrounds, and that makes it more interesting when we engage in the various numerous subjects. Since we deal with religious conflict, Yael, an Israeli Jew, discusses the issue about Palestine and Israel in such a way that sometimes you feel like you are right there. She once said that you don’t have to believe everything when visiting her country (Israel), because sometimes, they are just really for tourists to add special effects which are really just for tourists.

Then there is Famidah, a Filipina Muslim from Marawi (she is now Qatar-based) who shares about Islam. When Yael and I attend the class on Islam, Famidah’s insights add so much more to the picture. In the evening this week, Yael had her MPR (Mid Program Review) with Dr. David Jacob, her adviser and an Episcopalian priest. Famidah and I were giving our opinion about Yael as a student. We learned that Yael loves her Islam class, and so do I. We learn a lot from each other.

I remembered asking some of my Filipino friends what they thought of Muslims when they were growing up. Almost all said that they feared Muslims as they are a savage lot, beheading people, or using violence. Well in my opinion having fear is not the absence of courage, but the absence of knowledge. And the only way to disperse it is through educating oneself about one’s fears.

The study of religious conflict gets interesting when our professor, Dr. Chesnavage, invites speakers such as a Guru from India who talked about the Hindu culture and practices. Then we welcomed three Turkish nationals who spoke about the clashes in their country during a coup d'etat. As I write this, there is an article that was released stating that the White House is considering extraditing Fethullah Gulen to Turkey in an attempt to reduce pressure on Saudi Arabia over the killing of Jamal Khashoggi. Interesting to know that in many religious conflicts, the U.S. may have an invisible hand … That’s another relevant topic to contend with.

Yesterday, our speaker was from the Baha’i faith which gave us a glimpse into their organization. Although not a widespread religion, it holds an important message of unity for humanity. It is similar to Confucius’s statement on his deathbed: “When the GREAT harmony is achieved, the whole world will become one.”

Every day in class there is something new to discuss. We have just scratched the tip of the iceberg on religious conflicts and what struck me most in yesterday’s class was a comment that there are three religions that proselytize the most. And they are: Christianity (yes, I agree), Islam (can’t deny it).....and no one guessed the third….which is….Buddhism. I once told my professor (in another class) that Buddhism is a philosophy--and he said, no, it’s a religion because it has rites and temples...so I guess it is...good to know. They proselyte? Hmmm. interesting. Time to research more.

Going back…..Winter break is around the corner and then comes Christmas ….And I am wondering what the Jews will be doing on Christmas Day...Yael says, “Nothing -work as usual.” As for Famidah, my new beshie, she says that it’s not in their calendar of activities, although Jesus is mentioned in the Quran many times as a prophet. But she says she wants a shirt that says, “I am Muslim, but I accept Christmas gifts.”....I think I'll just give her that.  :)

LTR 5513 World Religions and Global Conflict Utilizing a case-study approach, this course examines conflicts around the world and the role of religion in causing, exacerbating or ameliorating them. In seeking to understand religion’s role, students will examine comprehensively the religious, historical, political, economic, cultural and social background of the crises. Particular effort will be made to spotlight religiously grounded activists and leaders who have made a positive difference.