Wishing Everyone Far and Wide a Happy Thanksgiving 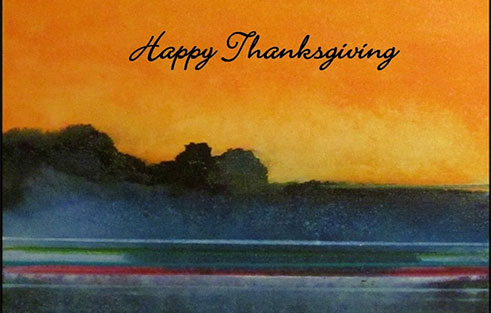 A sense of gratitude and indebtedness to others is an important wellspring of a generous and virtuous life. All people can recognize that they are indebted to their parents, who gave them birth and raised them at considerable sacrifice. But our indebtedness extends much further than that. Fundamentally, we are indebted to God our Creator and the powers of nature that nourish and sustain our life. Then, since the food we eat travels from the soil to our dining table by passing through many hands--that cultivate, harvest, clean, package, transport, sell, and prepare it--we should recognize that we rely on the labors of many people in order to survive. A sense of gratitude to others is thus acknowledging our interdependent existence; it is an antidote to the illusion of egoism. Such gratitude is recalled and expressed in the prayer of grace or thanks offered before meals.

Thanksgiving Day is a harvest festival. Traditionally, it is a time to give thanks for the harvest and express gratitude in general. It is a holiday celebrated primarily in the United States and Canada. While originally religious, Thanksgiving is now primarily identified as a secular holiday albeit of historical, legendary, and symbolic significance.

There was also an early "day of thanksgiving" recognizing the arrival of 38 English settlers at Berkeley Hundred on the James River, Virginia, on December 4, 1619.

Today, Thanksgiving is celebrated on the fourth Thursday of November in the United States and on the second Monday of October in Canada. In America, Thanksgiving dinner is held on this day, usually as a gathering of family members and friends. It is a day for watching football games, parades, and television specials. Thanksgiving also marks the beginning of the Christmas shopping season. Thus, just as the history of the early settlers in North America reflects both self-interest and the guidance of God, the celebration of Thanksgiving has come to be equally mixed. Nevertheless, this holiday provides a valuable opportunity for the strengthening of family bonds, expressions of gratitude, and, at least for some, a reminder of the hopes and struggles of both those who already inhabited this land and those who sailed from Europe as new settlers.