Kinda Zongo: Acquiring Skills and Knowledge in Peacemaking at UTS 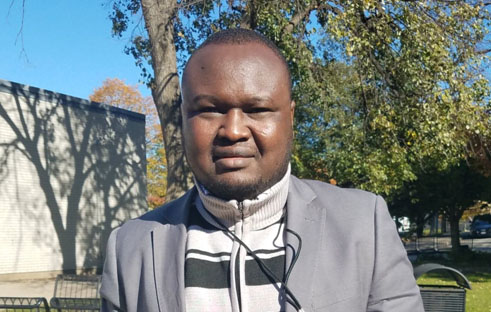 Kinda-Manegda Theophile Zongo is from Burkina Faso. Born and raised in Ouagadougou (the capital of Burkina Faso), he is the fifth of seven children. Zongo tells us, “I’m from the Mossi ethnic group. We are Catholics but a large number of the family are still proudly following our ancestral beliefs. Coming from a modest family, I already realized that only studies can help me to realize my life. I earned my Baccalaureate degree, which is a French high-school diploma. After that, I went to the Université de Ouagadougou where I earned my Bachelor degree in Administration Law and my Master degree in Business Law.”

He is now earning his Master of Arts in Religious Studies degree at the Unification Theological Seminary (UTS), with a concentration in Interfaith Peacebuilding. Zongo says, “The first reason I took this program is found in my name, Kinda-Manegda, which in my local language (Mooré) means ‘the one who brings happiness.’ I committed myself to make peace and to build peace wherever there is a need. To realize this commitment, I understood that I needed to be professionally trained, but also to get profound pieces of knowledge about the scriptures that are sometimes, unfortunately, interpreted in the wrong way, which can lead to conflicts. The second reason is that the world is changing, with more people and less tolerance. Freedom of religion is threatened in many countries and the world needs qualified peacemakers and peace builders to anticipate and instill tolerance and peace in the world. So this Master’s degree is, for me, a real step to get the necessary skills to be qualified and work through the NGOs to create a better world.

“Coming from a country where people live together without barriers between them, I found UTS as my home because I keep enjoying the diversity of cultures, religions, etc. I learn from others -classmates, professors, members of staff, and I also share what I know with them. UTS is really building bridges between people from different backgrounds.”

When asked about his professors, Zongo says they are “great people full of knowledge who pass it on to the students with professionalism. Until now, all the teachers that I met at UTS take their work seriously, pushing the students to give their best. Classes are interesting and teachers always motivate us, never letting us leave class with questions unanswered. We have a great time with them, learning about theology, but also gaining valuable lessons from their life experience.”

What about his classmates? “The women and men, my classmates, are wonderful people; hard workers. I enjoy this journey with all of them. We are all originally from different countries; through UTS we are living as brothers and sisters, respecting each other’s culture, beliefs or religion. Most of us have jobs, and taking full time courses is not easy, but everyone is trying to give their best in order to reach their goals.

“Working and going to school is not easy to do. In the beginning it was hard for me but I managed to find the way to deal with it. I am taking 9 credits, with classes 2 days in the week and I work the other 5 days. Most of the time when I have a load of homework I stop working or I work only the weekends in order to have more time to finish my studies. As a taxi driver, I have the freedom to manage my time to take classes and make money for my bills. I am able to balance work and studies. My only problem, is that I am no longer able to both make money and save.”

It is not all study and work for Theophile Zongo. Like many of his countrymen, he likes “playing soccer or watching competition such as the European Champions League. I'm also a fan of American Football even if I do not understand all the rules.

“I really agree that New York City (NYC) is unique and I even think that NYC is the best place where you can experience love from people that you least expected it from. The diversity of culture, religion, race, nationality and more make NYC the capital of the world. I like learning from others and sharing my journey with them. People from everywhere are living peacefully here in NYC, and you can clearly see that we can make peace in this world if we put apart some considerations (e.g. politics) and live together as we do in NYC.”

Discussing the African expatriates in NYC and their relations with their homelands, Zongo agrees that there is “a huge African diaspora in the USA led by Nigerians, Ghanaians, Egyptians, Kenyans, and Guineans etc. Every year billions of $ are sent to Africa by the diaspora community. These remittances influence our home countries because it’s a primary source of income for many people when that money is sent back. It helps cover children’s education fees, food, healthcare, and social events. One member of the diaspora is hope for a whole family of people. Africans working hard here in the USA get the funds that they couldn't earn back there. These funds might allow them to start a business which can employ some of the unemployed, and influence the economy. The diaspora remittances also reinforce the infrastructure in Africa, building schools, and buying ambulances etc. All these contributions are meaningful for our countries.”

A final question to Zongo concerned the hope for reconciliation between Islam and Christianity in Africa. He responded, “First of all, I do not think that there is a conflict between Islam and Christianity in Africa. In most of the African countries, people are living together and tolerance is our daily behavior. Africa is where diversity of beliefs is accepted. When you take our traditional beliefs, there are a lot. Each tribe has its gods, but they never fight each other because one thinks that the other is a gentile or follows a false god. What is happening in some countries in Africa is the result of political groups trying to take advantage of others. I am born Christian but raised in an area where most are Muslim. We never see differences between us; nobody tries to deny the religion of his neighbor or friend. Since some people want power, they used and twisted religion, thanks to all the false pastors, imams and priests who preached differently from what the scriptures said. So the politicians used them to reach their goal of separating territories in order to constitute a new country. After studying the UTS course World Religions and Global Conflict, I learned that scholars such as Samuel P. Huntington think that religious groups will fight each other forever and this could lead to a global conflict.

“My answer is that it’s time to promote interfaith activities in order to bring people closer and share love rather than hate.”