The Road to Chaplaincy: Linking Arms across Faith 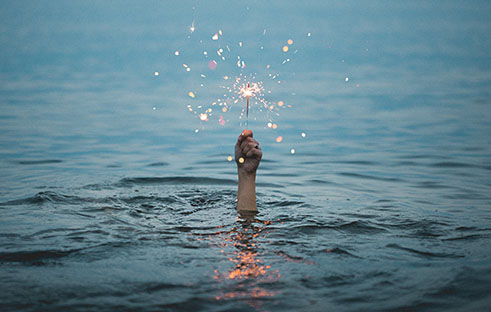 In 1999 Marilyn first considered pursuing training as a chaplain; she admits, in retrospect, that it was far more challenging than she had realized. “I had no idea of how intense it would be. I went back to school to get my MA and my MDiv at a Methodist seminary in the Midwest. They graciously took many of my Unification Theological Seminary (UTS) credits so I didn’t have to repeat my MRE (Master of Religious Education).  I added on a year of anthropological studies and indigenous people studies. We really opened up our understanding of religion as a human endeavor to understand the world, create social structures and structural norms.”

“When I was getting my MDiv degree I already knew I didn’t want to be a minister. The school suggested an internship at a county church, but those weren’t available so I ended up working with the Salvation Army at a homeless shelter because they were looking for an intern. They had a community center, held AA (Alcoholics Anonymous) meetings and helped homeless men, and also homeless women in another facility; they even had a facility for teenagers. I was the intake counselor and in order to get their story I really had to learn to listen. I wasn’t expected to help them, just assess their situation and then the social worker would look at my notes and consider my recommendations. Of course, the story might change the next day when a person was sober!  I worked with an amazing social worker who looked like a cowgirl – big hair, cowgirl shirts with fringe, and cowboy boots. We would pick up people under bridges, take them back for a meal and I tell you - no one messed with this lady. I really grew to respect her. The Salvation Army is a great organization; they can cut a dime four ways and come out with a quarter. They took no nonsenses from the guys and they were almost always at full capacity every night.”

The initial motivating force that propelled Marilyn into the chaplaincy was the experience of watching her mother slowly succumb to Alzheimer’s over many years. “It was through this painful experience - especially when she was in hospice in the last six months of her life - that I had the eye-opening experience of seeing a chaplain in action. A woman named Cynthia worked closely with my dad. My mother had been slowly declining and my father was so intent on giving her a quality life; he worked so hard to give her that. I watched this amazing chaplain help him prepare and help her to have a quality death. She won my love and trust and finally my mom’s as well. She really helped my dad and I provide a wonderful death for my mother. I remember just being in awe of how she was caring for my mom. And it isn’t easy to work with my dad; once he gets focused he’s like a laser beam! I’m like that, too – it’s just a “get out of my way” approach to things. But I closely watched Cynthia and I really resonated with what she was doing. She was so calm and peaceful. I respected her work and the thought came into my mind- I want to do what she is doing.”

Marilyn points out, “The process to become a chaplain is arduous; you are in a hospital setting for many long hours, you may get a stipend, but it’s not very much. A person needs at least four units of CPE (Clinical Pastoral Education,) and occasionally a summer credit.  Sometimes it is easier to be hired by a hospice, but (to work) in hospitals you have to be fully accredited and Board certified.”

As a UTS graduate and the first alum to pursue the chaplaincy, Marilyn found that she had to really prove herself. Instead of the required four units of CPE she took ten. “I was very closely watched, but over time I received accolades from doctors, nurses, and families. People stood up and took notice; that’s what happens when you are breaking new ground. I am from a Methodist upbringing so I know the language and the culture of Methodism. Regardless of where you work – with Roman Catholics or Methodists or Mormons you need to respect the people you work with, their language and their culture. If you can pass through this training program I can assure you that you’ll be a better person.  I was challenged to really learn to listen; this training helped me to listen better to my kids! In the long run the chaplaincy is something you really need to be called to.”

Sharing some of what she has learned over two decades in the field, she outlines her approach. “As a chaplain, you are taking a person’s spiritual milieu and their confidence or lack thereof. You are dealing with their emotions, and spiritually addressing their fears. You need to create a safe place for them to be in.”  Over the years, there is something, like a motto, that she has followed, 'Be flow, be silent, be stupid.'

“To ‘be flow’ you need to always be aware that someone may be dying so you just cannot be in a hurry; even if you’re going to have to deal with all the paperwork later on you cannot rush. You may be in a hospital room or a room beside the morgue. The victim or person who has passed needs to be washed, covered with a sheet, the body has to be repositioned. You have to take your time and never hurry. No matter what.

“To ‘be silent’ can be a challenge. I spent nine years studying religion – I had my MRE, MA, MDiv –but you just can’t get this 'I know everything about religion' attitude because when people are dying, they don’t care about what you know.

"To ‘be stupid’ means you need to acknowledge your ignorance of all the particulars. As you come on the scene you don’t know anything about the people you are about to work with; even before I go into a morgue or into a hospital room, I always stop at every door. I put my hand on the door and pause. Pause, breathe, wait – then walk in. This way I am slower, more quiet.  You do not know their situation – so ‘be stupid’ – the last thing a person in crisis needs is arrogance. You need to be able to help create a sacred space; somebody needs to be there so people can tell their story again – someone who can appreciate and hold that story anew. When you are silent and calm, things just come rolling out… I could write a book about it.

“There is a kind of magic in this process; it’s not just my words. You often have to calm your co-workers. I know when I get a call to come in, things aren’t going well. Doctors make their announcement about someone’s death and then they leave. Maybe a social worker will ask you, 'Are you ok?'  And you just reply, 'You can leave now…'"

Marilyn would be in a room for a couple hours with a grief-stricken family and then emerge. “Everything would have shifted; doctors would often say, ‘I don’t know what is going on in that room, but it is PFM – Pure Fxxxxx’ Magic’.

"I would only offer to pray if people asked; you need to pay attention, be slow and observant; pick up on the cues; knowing what to do and when to do it means acquiring emotional intelligence.

“Over the years, I have been present at 1,400 deaths. I have been in every possible situation you can imagine– a mother losing a baby and no spouse is with her; a car crashes and one sibling lives and the other dies – and there you are with the survivor. I was with a Pakistani woman whose husband had just collapsed from a massive stroke. I sat with her for two hours while she lay on her husband’s chest and wept. When it was all over, she exclaimed, ‘We owe you everything’. She was now a widow with two boys to raise and I was just there with her, providing loving kindness and presence. It took years for me to develop this ability; sometimes I would just be numb to the bones.

“The presence you provide is an interesting thing, it’s a craft. There is a lot of pain and you have to embrace it, but you can’t be involved with it. You have to put yourself on a shelf; hand it off. It’s not about you. You can have your emotional reactions, but you have to park them; people have suffered a loss and they’re in pain. You have to put yourself aside so there is space for the people who are in shock and grieving. Many times someone has come back to see me years after they have lost a loved one. I may not remember them – but they may come in on the anniversary of a someone’s death and they just have so much gratitude.”

Ironically, one of her colleagues with whom she was most impressed was a non-believer. “The best chaplain I ever met was actually an atheist; he felt something definitely existed, but not a religious god; he was a Unitarian pastor and I learned so much from him. He now works for a Mormon hospital and he doesn’t talk about his non-religious orientation; however, he is a deeply spiritual man and has a great sense of humor, too.”

When reflecting on her 20 years of being a chaplain, Marilyn shares the story of the Four Chaplains to underscore the kind of person who exemplifies what a chaplain can be. Often known as the “Immortal Chaplains” or the “Dorchester Chaplains”, they were four United States Army chaplains, all from different faiths, who gave their lives to save civilian and military personnel on the SS Dorchester when it sank on February 3, 1943, during World War II. They helped other soldiers board lifeboats and when the supply of life jackets ran out, they gave away their own life jackets to frightened young sailors. They did all they could for others, and, as the ship went down, the chaplains joined arms, prayed and sang hymns. Survivors could hear different languages mixed in the prayers of the chaplains, including Jewish prayers in Hebrew, and Catholic prayers in Latin.

In closing, Marilyn reflects, “If you just want to preach to people you can be a minister and thump your Bible, but as a chaplain, you need to be able to give people space to deal with sudden tragedies. Being a chaplain is a noble profession, but you have to cultivate your capacity to link arms across faiths – or possibly no faith – and to be present to people when they are in crisis and their boat is sinking.”

After two decades as a hospital and hospice chaplain, Marilyn currently works on a part-time basis in a hospice on the West Coast.