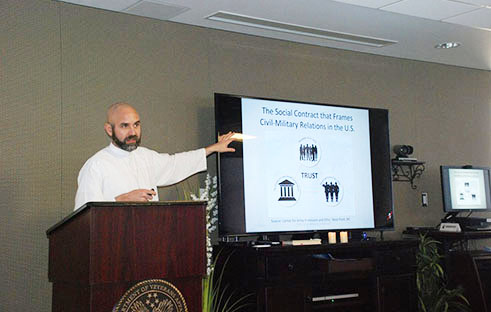 NEW YORK - Starting next Wednesday, September 5, at the 4 W. 43rd Street campus of the Unification Theological Seminary (UTS), The Rev. Dr. Chris J. Antal (UTS‘04), a staff chaplain in the U.S. Department of Veterans Affairs (VA), will offer the first of four seminars that make up the Community Clergy Training Program (CCTP) to educate those in faith-based communities of the need for outreach to veterans.

Dr. Antal giving a presentation about the moral injury group that he started in collaboration with a staff psychologist at the Philadelphia VA.

The program is offered on the first four Wednesdays of the month - September 5, 12, 19 and 26 - and will run from 10 A.M. to 1 P.M. The training, which was launched by the VA in 2016, and which Chaplain Antal has taught several times over the past two years, is broken down into four topics:

Dr. Antal has a long history of working with military veterans, and is currently the Staff Chaplain at the Corporal Michael J. Crescenz VA Medical Center in Philadelphia, where he now resides with his family. His interest in the military - and chaplaincy - began in earnest on September 11, 2001. He was attending UTS at the time as a Master of Divinity (MDiv) student when the Twin Towers were attacked, and fell.

He later joined the US Army and served as a chaplain for nearly eight years, including a six-month tour of duty in Afghanistan in 2012-13, at which time he encountered, as he described it, “a very personal and intimate way the pain and stress that is carried, very often in isolation, by service members and veterans facing death and suicide and trauma.”

Not long after his time in Afghanistan Chris left the Army, but was still motivated by his desire to work with veterans, which, as he put it, “has been the focus of my ministry for the past decade.”

"Be a Peace-builder and a Peace-maker"Chris Antal

With suicides among veterans running at record highs, the importance of educating the clergy, as well as the public, cannot be overstated. He was quick to point out, however, that the VA is not the culprit in this, as is so often the case made in the media.“It [suicide prevention] is one of the priorities of the VA nationwide,” said Chris. “When veterans are killing themselves in record numbers - 23 a day - it’s a concern for anyone who cares about the health of veterans and society as a whole.

“I would say that along that issue, however, it’s wrong to point fingers at the VA and say that it’s because of VA incompetence that veterans are killing themselves. In fact, data indicates two-thirds of the vets who kill themselves are not enrolled in VA health care.“So, I think there’s other factors beyond just quality care. I think the VA, in terms of mental health, provides exceptional service, and often that’s under-reported in the media. There are other factors affecting veteran suicides, including lack of involvement and apathy in the general society.”These numbers, and other factors, have motivated Chaplain Antal and others within the VA to provide the CCTP to reach out to faith-based communities - whether clergy or lay people - and educate them about this widespread problem that affects literally every community in the nation.The goal of the program is a simple one.“The goal is to build the capacity of faith communities,” said Chris, “to welcome veterans into their communities and to recognize the moral and spiritual dilemmas that veterans encounter, and to make appropriate referrals when necessary to various providers within the VA.”

When the Twin Towers came down Chris had, as he described it, a ‘sense of call to be a peace-builder and a peace-maker.’ 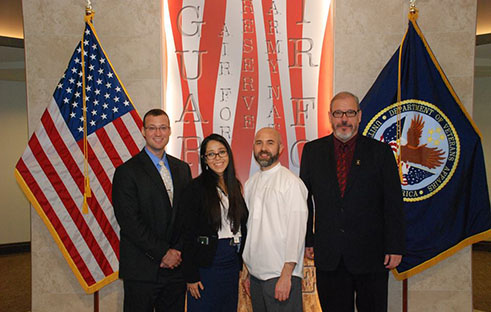 “I believe that we, as a nation, and as a citizen of the U.S., have a special responsibility to have stewardship over the military. We have the most powerful military in the history of the universe, so I think it’s a matter of being responsible stewards over that military force, and I think it’s a matter of being responsible for the consequences of the use - and sometime misuse - of that military force and its cost on the human person, not only the Veteran but also the people who live and breathe and raise their families in the countries where the United States is involved in armed conflict.”

Dr. Antal was invited to present at the national VA research center in Texas.

Rev. Dr. Antal is also the part-time minister at the Unitarian Universalist Congregation located in Rock Tavern, NY, and will also be teaching the course Moral Injury and War at UTS this Fall semester. To learn how to sign up for this course click here.

Registration for the CCTP lecture series is still ongoing, and open to everyone at no cost. To learn more about the seminars or how to register, please click here