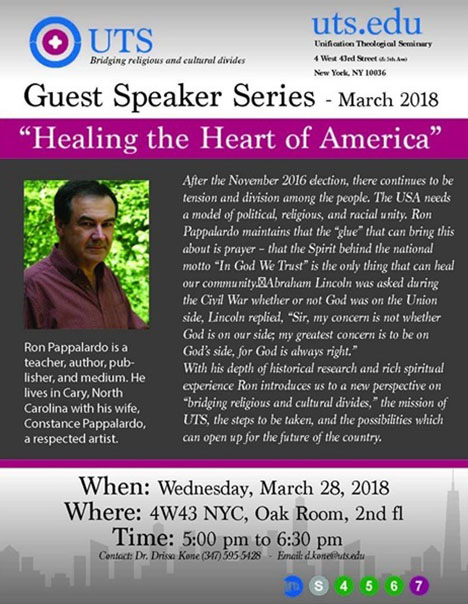 New York City – An interfaith spiritual leader said that the current social problems, ranging from drug addiction, to family breakdowns and rampant shootings throughout the USA, are basically caused by the “unforgiving mind” of individuals which is a reflection of the lack of spirituality.

Ron Pappalardo, author, historian, Reiki master, medium, and international lecturer, voiced that in order to heal these social problems, America has to embark on a spiritual revival through individual and community prayer.

Pappalardo recently spoke at the UTS Speaker Series on the topic “Healing the Heart of America”. He communicated the need for renewed spiritual experience in order to bring about peace. He proposed that this begins within oneself, within the family, and within the community. A student of religion at  UTS and the Morris Pratt Institute’s “Educational Course on Modern Spiritualism”, Pappalardo said that prayer and meditation may need to be practiced again in schools to gain spiritual enlightenment. He said that America had started out as a faithful Christian country, as expressed for example, in the US currency, which bears the inscription “In God We Trust”. But today, there is a crisis of America's heart.

For the past 20 years, the US has been troubled by massacres occurring in schools and public places that involved young assailants brazenly victimizing innocent civilians. A research study by ThinkProgress.org reveals that the rate of people killed by guns in the US is 19.5 times higher than similar high-income countries in the world. In the last 30 years, America has mourned at least 61 mass murders with the Columbine High massacre in 1999 often cited as the most gruesome.

According to Pappalardo, inner turmoil is rooted in the lack of spirituality, hence prayer and meditation are needed. “Prayer is when I talk to God and meditation is when God talks to me,” he explained.

During the UTS forum, Pappalardo shared his recent prayer revival meeting in North Carolina where he invited his neighbors to come to a community center with the simple message of “uniting beyond politics, race, and religion through prayer.” 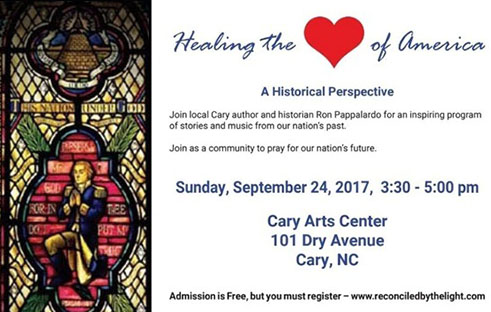 After the November election, my son Gabriel urged me to do anything I could to heal the divisions and mistrust – political and spiritual – that are plaguing our nation’s discourse. That was the inspiration behind this “Healing the Heart of America” event. We are coming together as a community to reflect on our nation’s history and what we can learn from it, and celebrate the things that unite us – faith in Divine guidance, family, and compassion for others.

“I had a wonderful turn-out. There was no preaching, just prayers. For our neighbors, it had good impact as we came to know each other. My hope is for others to copy it,” he shared enthusiastically.

Pappalardo said that it takes only one individual or a handful of people to start powerful revivals. He shared how Jeremiah Lanphier began a prayer meeting on Wall Street with just six people in 1857. “He started a noontime prayer between 12 to 1pm. At noontime, no one came. Thirty minutes past twelve, people came trickling in. ”According to Pappalardo, the following week, many more came to Lanphier's noontime prayer meeting. Within six months, 10,000 New York businessmen gathered daily for lunch time prayers.

“Remember, this was Wall Street. It became a well spring for prayers. It is time to cultivate our spiritual experience. As Rev. Moon had said, we have to develop our personal faith and authentic communication with the spirit of God to bring about peace,” Pappalardo declared.

My desire has always been that the theological curriculum of this school should not be dependent only on doctrine and ritual. I have also endeavored for this campus to be a place where the students can develop deep personal faith and authentic spiritual communication with the spirit of God. Rev. Sun Myung Moon Commencement Address, 1985

There were technical difficulties, so the first part of the program was recorded on smart phone

Watch: Healing the Heart of America with Ron Pappalardo Part 1

The last section as captured on the MEVO platform

Watch: Healing the Heart of America with Ron Pappalardo Part 2