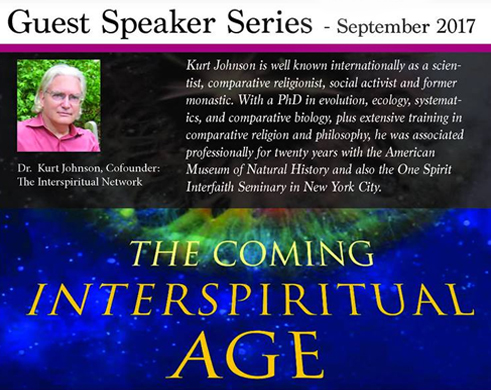 New York City – In spite of a growing sense of chaos and the heightened threat to public safety in recent days, humankind has actually been evolving into new age of spirituality.

This hopeful message was shared by Dr. Kurt Johnson a comparative religionist and social scientist who said that people around the world are awakening and growing to be tolerant of each other’s differences.

Dr. Kurt Johnson, author of The Coming Interspiritual Age, said that there has been, in the past several decades, “a great shift of consciousness from head to heart, where people are concerned with love and justice and not so much on their religious dogmas.”

Speaking before UTS students, faculty and invited guests, Johnson proposed that interfaith consciousness, which is essentially spiritual, is advancing globally.

The growth of Interfaith dialogue among leaders and practitioners of different religions flowered into the possibility for spiritual exploration and expression. The late Wayne Teasdale, author of The Mystic Heart, coined the term “Interspirituality” which explores the mystical commonality of all spiritual paths.

“The head sees differences while the heart sees commonalities,” he reasoned.

Johnson said the shift in consciousness is part of developmental history, citing the work of Father Thomas Keating, for example, where East and West arrive at a common understanding of religions and the North and South engage in peace dialogues that include the wisdom of indigenous peoples.

“There is reason to be optimistic. Evolution itself shows optimism,” he pointed out.

The Coming Interspiritual Age sees this evolutionary process as part of “waking up and growing up” through “practice and praxis” of right behavior.

Johnson interestingly called modern day spiritual leaders the “evolutionary leaders,” those who know how to use their “homo sapiens brain” to be loving and kind.

He noted that the Interspiritual Age has developed along with the growth and recognition of women’s leadership globally. Johnson referenced the work of Eckhart Tolle, and the consciousness of the Divine Feminine which has developed as the fourth wave of the global feminist movement. “The consciousness of the Divine Feminine, which is nurturing and has an eye for detail, is getting to be unfettered and huge.”

According to Johnson, global institutions, such as the United Nations (UN), have also become expressions of the evolution of consciousness. He pointed to the Committee on Spirituality, Values, and Global Concerns (NY) as well as the many NGOs (Non-Governmental Organizations) that together comprise over half of the UN, as an indication of that new consciousness.

“What is the UN without civil society?” he asked.

Meanwhile, the other face of the UN, is the Secretariat, which Johnson reproached for serving the ego-power structure of governments all over the world. Thus, said Johnson, the challenge is to continuously educate the UN member states towards the consciousness of spirituality.

Dr. Johnson asked the UTS audience to ponder the contemporary role of religion; whether religion will be a way to resolve human problems or be a part of the problem.

Dr. Idris Kone (UTS’12 and ’16), UTS Director for Student Services said that Johnson’s presentation was impressive, looking scientifically at the future of world religions. “I think we are definitely heading toward the age of inter-spirituality,” Kone said.