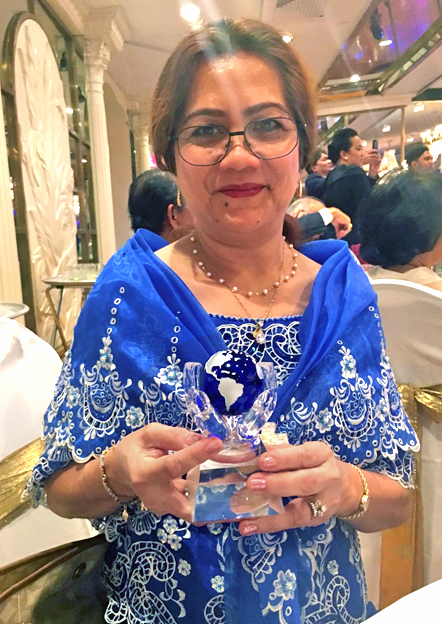 The Team United Maharlika Foundation Inc. (TUMFI) salutes and confers the Outstanding Foreign Workers Award to individuals working in the USA but were born outside of the country; who strive for excellence in their field while continually supporting the causes dear to their heart. Team United named Theriot as an awardee in the category women's advocacy on Sunday, September 17, 2017 at the Astoria World Manor in Queens. In addition to Joy Theriot, sixteen other individuals were recognized for their community service in categories such as teacher, doctor, dentist, care-giver, engineer, nurse, lawyer, government official, and entrepreneur.

It's a rewarding feeling at the same time a great responsibility. The challenge is to continue with the work for many women, to empower them and achieve gender equality"Joy Theriot, TUMFI awardee, UTS Director of Recruitment

Joy's commitment to social justice dates back in her college years at the University of Bohol in the Philippines where she was the national coordinator for the Collegiate Association for the Research of Principles for 10 years, working with students, university officials and politicians.

When she married John Theriot and moved to Houston in Texas, she became chairperson for the Women's Federation for World Peace (WFWP)-Texas where she assisted women in distress through counseling and legal support. She also promoted women's leadership through WFWP’s work in such areas as Spirituality and Healing; Marriage and Family; also Human Rights and Women’s Dignity.

Her family moved to New York in 2012, and Joy became active at the United Nations Economic and Social Council where she has helped organize and promote events for International Women's Day celebrations and the attainment of the United Nations Millennium Development Goals, 2015.

Joy Theriot continues to expand her networks and develop her involvement in community programs and non-profits. She is currently Vice President for UN Affairs with We Care for Humanity. She also helped found the Filipino International Community of America where she is currently a Board Member.

TUMFI is a charitable institution founded by Rene Ballenas in 2011. The foundation created the Overseas Foreign Workers Awards in 2014 to recognize nationals from different countries who continue to provide support and contribute to the development of their motherland and the American society.