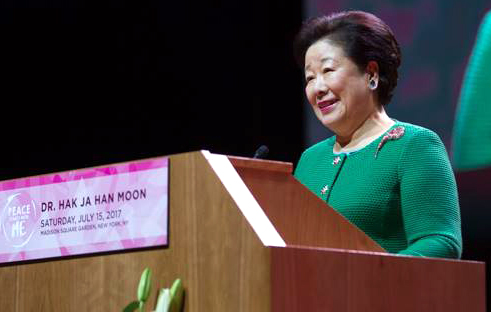 Several thousand attendees from around the world were also watching a live stream of the event, promoted as “A Festival of Inspiration, Praise and Worship” and calling people to come together to discuss America’s responsibility in front of heaven. For UTS alumni gathered in the arena the interfaith event, with people from so many diverse ethnicities, and the call to action that Dr. Moon made were evocative of the UTS mission, and confirmation that UTS was indeed still in line with the thinking and practice of the founders.

Speaking to the packed audience, “Mother Moon,” as she was referred to by presenters and the emcee, began her 26-minute speech with a video that recalled the time when she and her husband, the late Rev. Dr. Sun Myung Moon, first came to America in 1971 with “a new message” to revive America and return it onto the path to God.

When she and her husband first came to America they were “shocked to see how this beautiful nation was suffering.” To call America back to God, the True Parents, “held huge rallies at Madison Square Garden, Yankee Stadium and Washington Monument and have blessed tens of thousands of marriages.”

Although her address was less than 30 minutes, it was filled with the knowledge and the understanding that the world sits on a dangerous precipice. She touched on a variety of issues: wars between peoples and religions; the environment and how it has lacked stewardship and has been misused; and the need to care for the 7.4 billion people on the planet.

Mother Moon spoke candidly and sensitively about the history of God’s providence, the history of the first man and woman being separated from God, and God’s preparations for the messiah to bring salvation to humankind. She explained that God’s providential history had been repeatedly compromised, as seen when Jesus was unable to get the support of his family, and even in the chosen and prepared environment of Israel the people failed to understand him: he was unable to marry, and was abandoned to go a suffering course alone. However, in the continuing providence to bring the second advent, God worked and also raised up His only begotten daughter, born in Korea in 1943. In 1960 the True Parents, Rev. Sun Myung Moon and Hak Ja Han Moon, were blessed in marriage: “The Holy Wedding of the Lamb.”

She proclaimed that the work of the Family Federation for World Peace and Unification has successfully multiplied to over 120 nations with blessed families throughout the world. In a statement as strong and direct as any Rev. Sun Myung Moon gave in his many years of delivering speeches, she proclaimed that, “Only through True Parents that fallen humanity can be born again, and that process of salvation is the blessing that we have in the Family Federation.”

She explained the dire need for true parents who can guide the world to live as true brothers and sisters, and how America needs to remember its mission, how God has prepared America to be a leader in bringing peace on earth. That pursuit of peace begins with each one of us. She closed with a call to action. True Mother called for an American “courageous vanguard” to unite with her and practice true love, living for the sake of family, neighbors, churches, and the nation. She implored the audience to be lights unto the world, and to shine in even the darkest of places. With that type of action then God’s peaceful home on earth is not far away. She closed her remarks with “God Bless America.”

Before and after the speech, the audience was regaled with the voices and dancers of the 2000 Voice Choir and the Praise Dance Team, under the direction of A. Curtis Farrow; Grammy winner and renowned vocalist Yolanda Adams, Bishop Hezekiah Walker, Shamira Mighty, the Apple Heaven United band, and the International Dance Performance offering an original production entitled “Mu Jo Geon.”

Dr. Michael Balcomb (UTS’94 and ’09) President of the FFWPU-USA, opened the festivities and later read proclamations from two New York City boroughs. The president of the Borough of Brooklyn declared July 15 “Peace Starts with Me” Day. 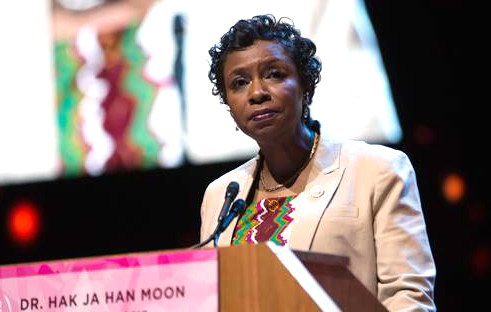 The Rev. Dr. T. L. Barrett, Life Center COGIC, who stood alongside his wife Cleopatra as he gave the introduction to the keynote speaker, witnessed to how Mother Moon had personally advised him on how to deal with issues in his marriage, and how that advice helped him to re-dedicate himself to his wife and marriage.

Congresswoman Yvette D. Clarke, Brooklyn, a former member of the New York City Council and currently in the U.S. House of Representatives, offered her praise and congratulations to Mother Moon and echoed her thoughts of the need to live for the sake of others by quoting Dr. Martin Luther King when he said that, “Injustice anywhere is a threat to justice everywhere.”

Prior to the speech many UTS alumni and alumnae gathered in the lobby of the New Yorker Hotel and outside Madison Square Garden sharing greetings and reliving past activities together. More than 150 UTS alumni came from all over North America to honor Dr. Moon and to listen to her renewed vision for peace. The call to action from Mother Moon, herself now 74 years old, reminded the alumni, young and old, that creating the environment for true peace continues to be a lifelong mission. Several alumni expressed gratitude for the opportunity to reconnect and looked forward to maintaining current ventures and even kick-starting new projects in service to the community and nation.