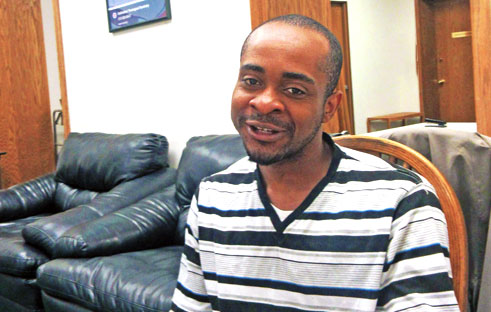 NEW YORK - It wasn’t long ago that first-year Unification Theological Seminary (UTS) student, Emmanuel Ndupu (MDiv candidate), was at home in Lagos, Nigeria pondering what God had in store for his future. He had already used his degree in physics from Redeemer’s University to secure a job with a plastics manufacturer in his hometown. He was working as a salesman for the company, filling orders and trying to get new ones. The problem was that he knew his future lay elsewhere, but he didn’t know where - or how he was going to get there.

Emmanuel knew this, just like he knew the way he looked at the world was different from others; he also knew he had the courage to act on his beliefs. His mother knew it, too. Hearing about UTS from a relative in Brooklyn who knew Cristabel Unobe who is a student in the MA program, and a recruiter for the school, his mother encouraged him to apply.

It wasn’t the first time she had helped or encouraged him to do something that required a difficult decision concerning his religious beliefs. Emmanuel had been raised in the Catholic Church, but when he hit his teenage years he began asking questions that the church either wouldn’t - or couldn’t - answer.

I know I’m on my way to finding my purpose because I’m asking a lot of questions, and I have what you would call an ‘inner hunger’ to succeed. I know I am on the path, but I also know I can’t do it on my own. I need the grace of God.”Emmanuel Ndupu, UTS MDiv candidate

Finally, his relatives stopped talking to him, but his mother was, as he put it, “more flexible.”

“She grew up in an apostolic home,” said Emmanuel, “so she never really forced the Catholic faith on me. She told me that as far as your conscience is right you should just go with it.”

Emmanuel started attending a Protestant church, Redeemer’s Church of God, and knew he was heading in the right direction. Not long after, he entered Redeemer’s University, which was affiliated with the church, and graduated with a degree in physics degree.

“While I was in Redeemer’s University studying God I had a different perspective,” said Emmanuel. “At Redeemer’s I had a feeling of seeking God and of seeking one’s purpose in life.”

Observing that many people just pick a certain job to “get by in life,” Emmanuel had a stronger calling to live a life filled with greater purpose. However, this also required from him a greater commitment to seek out what this purpose was, and a greater desire to fulfill it.

“I know I’m on my way to finding my purpose,” said Emmanuel, “because I’m asking a lot of questions, and I have what you would call an ‘inner hunger’ to succeed. I know I am on the path, but I also know I can’t do it on my own. I need the grace of God.”

Emmanuel, now 27, has relied on his faith to bring him to where he is today, studying at a school he didn’t even know existed a year ago, in the heart of the largest city in the United States. It’s one thing to be living your dream, it’s another thing entirely to be living a dream you didn’t even know you had.

“I didn’t plan to be here,” said Emmanuel, referencing both the school and the city. “I didn’t know I would be here in 2017 talking to you, but I think God has a purpose for everything that happens - every single time, event, place… everywhere. And, I believe the best thing to do is put trust in Him. If it was just my own desires I don’t think I would be here.”

His studies at UTS have also opened his eyes to other things that he was unaware of and came to light in his favorite class, “Church History,” taught by Dr. (Michael) Mickler.

“So far, academically, I’ve come to understand that a lot of people died for what we call religion today, which, I think, the mass of people out there have no idea about. In America, for example, the Founding Fathers and their religious beliefs, I had no idea about that.”

Although he plans to study for another two years, Emmanuel always has his sights set on the future, even though he may be unsure what that future holds or where it will take him.

“I can’t give you a tangible answer where I will be (in two years),” said Emmanuel, “but as humans we tend to be selfish and have a lot of negativity. So, one needs a stable, spiritual aspect in one’s life to be able to move forward.”

There is one thing, however, Emmanuel is sure of: “If you know your purpose in life you will flourish.”