Giving back to the Ivory Coast 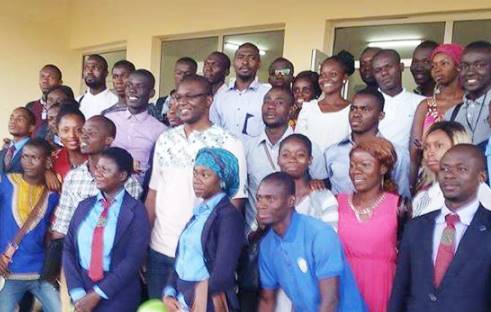 From June 21 to July 7 Dr. Drissa Kone (UTS’12 and ’16) was in the Ivory Coast. Of course, it is where he was born and where most of his family still live, but it was not a holiday visit that took him there.

Dr. Kone received an invitation from the University Pelefero Gon Coulibaly of Korhogo (UPGC) in northern Ivory Coast to lead a seminar "Leadership et développement personnel: cas de la communauté universitaire de l'UPGC." (Leadership and personal development: the case of the academic community of UPGC).  The seminar was given in French. Kone actually speaks 4 languages fluently: French (the national language of Ivory Coast), English, Bambara, and Senoufo (there are more than 70 languages spoken in the Ivory Coast).

The inspiration for this seminar resulted from Kone’s continuous efforts to advance his education. After receiving a M.Div. degree from UTS in 2012, he enrolled in Norwich University’s Master of Arts in Diplomacy program. He graduated from Norwich in 2014.

Kone invited his cousin to attend his graduation in Norwich, Vermont. His cousin, a professor at UPGC, was very inspired by the coursework that Kone had taken, and the splendid commencement ceremonies at Norwich University. 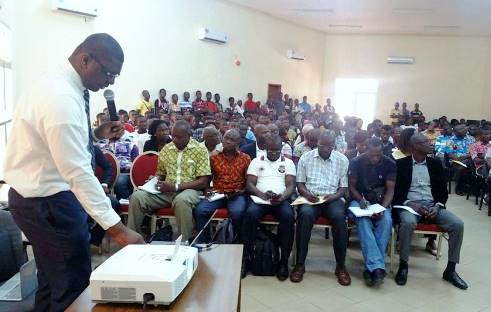 Kone received his doctorate from UTS in 2016. His dissertation is “The Practice of Active Listening in Managing Cross-Cultural Conflict: A Case Study of the Ivorian Diaspora in New York”. This was the practical application of Kone’s career focus on peace and justice, and transformational leadership. With the dissertation accomplished and degree awarded, Kone was free to travel.

On June 22 and 23 Kone ran the seminar at UPGC for 120 masters students and graduate research assistants. On the 24th, faculty and staff joined the program, together with the university president Professor Adama Coulibaly, and the local regional governor. That day the number of participants went up to 200.

The seminar was an outstanding success. The university wanted Kone to stay and work with them! They settled by asking him to come back maybe once every year or two to teach seminars.

The focal point of the seminar was transformational leadership and its main purpose was to increase students awareness on the idea that development and changes of every society start with individuals and leaders who can, as Gandhi said, ‘become the change they want to see in the world’”Dr. Drissa Kone (UTS'12 &'16)

When asked why the seminar went so well Kone said about leadership that “in the educational system of the Ivory Coast the spiritual and emotional dimensions are completely left out. The focus is on the intellectual. The course I gave filled that gap and provided an understanding of that dimension.”

Students responded by saying they had never thought about leadership in the way Kone proposed - that leadership starts by leading oneself and gaining emotional stability. In the typical university setting in the Ivory Coast, the focus of leadership is upon “doing”, upon external steps and goals. Kone’s perspective was new to them. 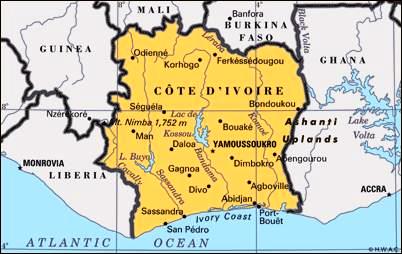 The question came up whether Kone was presenting a “western cultural” approach, something imported from the USA, possibly another colonial footprint. Kone was able to show that this leadership education is universal, and that it has principles which apply to people throughout the world in Africa, in Asia, and in Europe - everywhere. It is an inside-out approach to leadership. The university participants agreed that this is needed in the academic community in Ivory Coast and is needed throughout Ivorian society to guide effective social and economic development.

Kone emphasized the value of giving back to his birth country, even though he is now a US citizen. He said, “In giving we always receive something, in my case an internal satisfaction which is priceless.”

Asked what other takeaways he had from the experience, Kone addressed some interesting possibilities for UTS. He sees the potential for partnerships. The case of UPGC is relevant. UPCG is a relatively new university, the only significant university in northern Ivory Coast. It has strengths in the sciences such as agriculture and biology at undergraduate and graduate levels. However, as Kone discovered, there is a lack in certain areas. UTS has knowledge to share, especially in leadership studies and personal development. Though spiritual formation may not be the language commonly used in universities, it nevertheless introduces virtuous leadership that stems from sound personal development. The need is there for countries like Ivory Coast, to help them prosper. Kone makes the case for partnerships to develop in higher education in the Ivory Coast and other emerging countries.