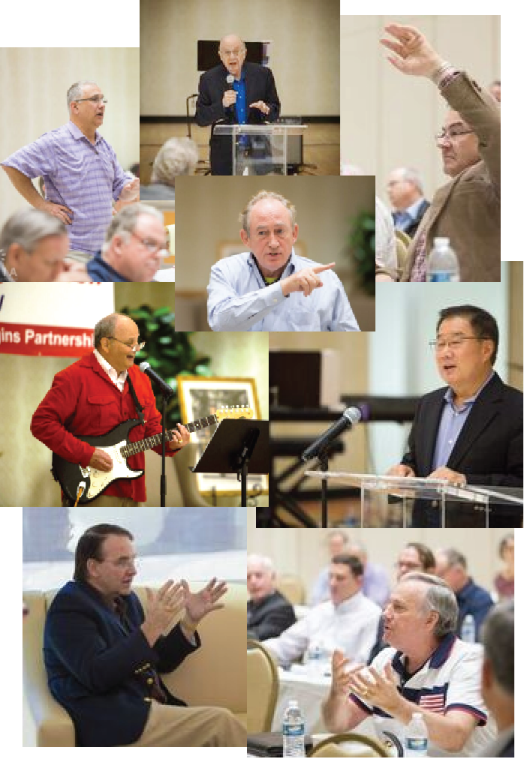 UTS alumni were among the presenters and attendees at the Top Gun Advance Conference at the International Peace Education Center (IPEC) in Las Vegas, Nov. 6 through 8. Dr.Ki Hoon Kim (UTS ’96), Continental Chairman of the Family Federation for World Peace and Unification, North America shared with the participants a message from True Mother regarding the Top Gun legacy.

“True Mother has praised the spirit of Top Guns more than a hundred times,” he told the conferees, and added: “Today, more than ever, True Mother has developed Top Gun education of our second generation. The most important thing for all of us is to be loyal to Heavenly Parent, loyal to our True Parents and loyal to America.”

“America is God’s chosen nation. We can build communities, states and a nation with the spirit of Top Gun. True Mother wants to implant that spirit into every nation.”

The term, “Top Gun,” was assigned to a group of Unificationists who were called by the Founder of the Unification movement to New York in 1987 to take on a new and unspecified mission. They were led to believe their next posting would be as missionaries to African countries. It turned out that their new role was to step out of their church missions and to work first for the American Constitution Committee (ACC) and later the American Freedom Coalition (AFC).  Those leaders of the AFC in the 80s and early 90s were responsible for implementing conferences for leaders in government, academia and ministry. Some of the Top Guns stood for elections in their respective states, and a few were elected to offices in state legislatures.

The invitation list to the conference in Las Vegas included many participants who had not been associated with the AFC but who had a record of citizen activism and thought leadership. Dr. Mose Durst, a former president of the Unification Church and Trustee Emeritus of UTS gave a lecture titled “Possibilities for the Compassionate Society.”

The assembly heard other presentations on “Changing the Culture and Citizen Engagement,“ moderated by Jim Gavin, with briefings by Tom McDevitt and Jim Boothby; the “Origins Partnership and the Future,” (Origins is a nonprofit dedicated to mentoring second-generation Unificationists); and “Spiritual Roots and the Founding of America,” by Ron Pappalardo. Conferees were also informed about the financial progress of the Washington Times by Dr. Michael Jenkins, (UTS ’77, ’10), and on new projects of the Washington Times Foundation.

Tom McDevitt, chairman of The Washington Times and a leader in the AFC during the 80s and 90s, briefed those assembled about the growing popularity of advertiser-sponsored special sections of the Washington Times focused on Constitutional literacy, the Bible’s influence in civilization, William Wilberforce, and the power of prayer.

The conference was punctuated by unforgettable jazz and gospel music from four veteran performers, Joshua Cotter, Ricky Joswick, Rob Schwartz (UTS’86) and Cory Boitano. The classics included standbys like, “If Life Were Gracious Enough,” and “One in the Spirit,” to jazzy gospel arrangements of “He’s Good!” and “In My Father’s House.”

Dr. Hugh Spurgin (UTS’77), president of UTS, was a co-leader of a breakout discussion group on Saturday focused on the topic of “rebranding the image of the movement.” He reported to the group the progress made to enlarge the readership of the UTS alumni newsletter. He emphasized that UTS alumni are making significant contributions to the culture of the Unification movement and of America itself, yet often without telling anyone about what they are doing. This is a situation Spurgin wants to reverse and is saying to the alumni, “Be proud of your alma mater, and who you are. “We do not know one another’s stories. Our UTS newsletter is now telling the stories of what our alumni have accomplished.”

Dr. Spurgin urged everyone to rally around True Mother during the current stressful situation of the movement. “True Mother is powerful, and she is determined, and worthy of our support. We alumni have to follow our conscience, and take responsibility ourselves to do what is necessary. I feel like I am the owners’ representative,” he said.