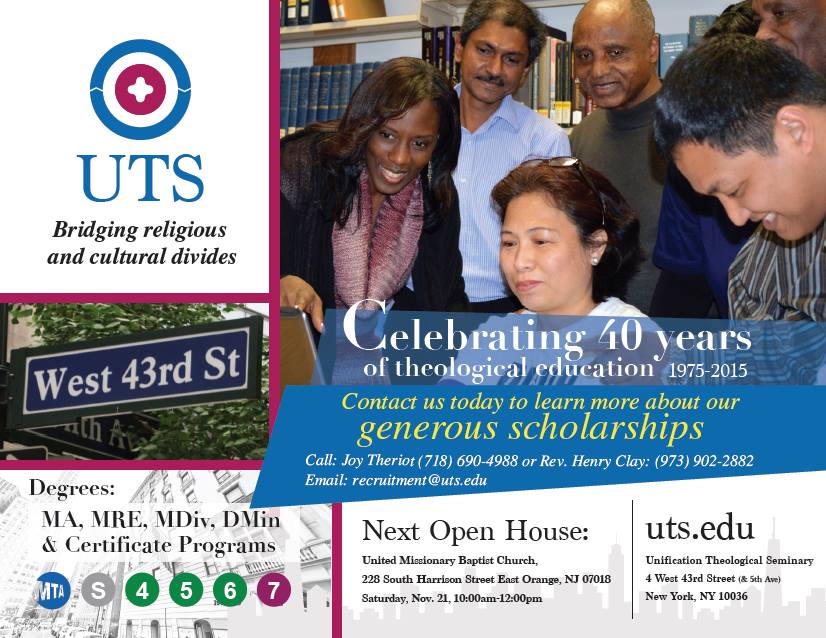 The November 2015 issue of The Positive Community will feature the second ad in the current advertising campaign that UTS has launched in the New York Metro area.

The Positive Community has a print circulation of 48,000.

One campaign goal is to recruit up-and-coming urban pastors from NY and NJ; to equip and empower them with skills and knowledge, and prepare them to make a stand for the moral revival of their (urban) communities.

Rev. Henry Clay, a current student and recruiter at UTS, told me that 16 months ago, when he began his ministry, he had 3 people in his congregation. Today there are 166 members! Rev. Clay identifies strongly with a core phrase from UTS’s mission: Bridging religious and cultural divides.

“I am a proud second-year student of UTS. There are several things that I really admire about this school. First is that it is an interfaith seminary with an international student body with students from many different countries from all over the world.

Although UTS has since its founding served as the primary seminary that has equipped many members of the Unification Church for service for Christ, it is also a mainstream seminary. It has a diverse teaching staff that includes professors from other faith tradition backgrounds such as Baptist, Methodist, Lutheran and even Messianic Jewish backgrounds. Being exposed to such a diverse student body within an ecumenical theological culture makes learning at UTS both challenging and fulfilling. Being here has already had a profoundly productive impact on my pastoral ministry and my growth in the Lord of Glory.” -Rev. Henry Clay

If you would like to download the current ad to promote UTS and show to your fellow alumni, friends and contacts then  please use: PDF file Half page 8.5 x 11