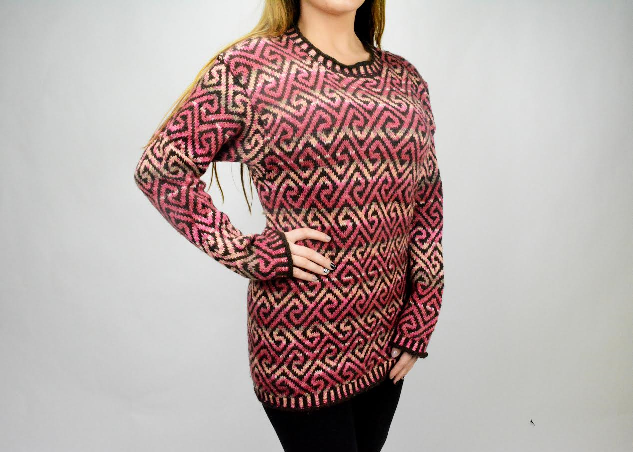 BARRYTOWN - All of us have games, pastimes or hobbies we enjoy. Ute Delaney, Registrar at the Unification Theological Seminary for the past 20 years and a 2010 graduate, has what she affectionately refers to as her “other life.”

Her “other life,” the one apart from her “lives” as a wife, mother of two boys ages 21 and 18, and working woman, is her immersion into the world of crafts, into the world of Fiber Arts. This area runs the gamut of handcrafts, including spinning, dyeing, weaving, knitting, and crocheting, with some of these dating back to the dawn of recorded history.

Spinning dates back between 9,000-10,000 years, and the discovery of spinning “whorls” to around 5,000 BCE. Hand spindles date back to 3,500 BCE, and archeologists have even speculated that the hand spindle may have helped in man’s discovery of the wheel. Dyeing of cloth and other types of raiment dates back to around the same time period.

Weaving can also be traced back nearly 7,000 years, with Egypt emerging as a major producer of goods around 3,600 BCE.  Knitting, which dates back to around 1,000 CE in Egypt, and crocheting, which developed using ‘hooks’ (croce in French), and became popular throughout Europe in the 16th century, are the most recent additions to the Fiber Arts world.

Ute’s interest in crafts first began as a 14-year-old back in her hometown of Frankfurt, Germany when she took up crocheting; a few years later her desire to learn spinning took hold.

That desire, however, took a back seat when she joined the Unification movement in 1975 to do full-time missionary work. This brought her to the USA, for the first time, in 1982 to participate in the 2075 couple Blessing with her husband, Dennis, at Madison Square Garden. She returned to Germany, then in 1987 re-joined Dennis in Texas to continue her missionary work. Along with her luggage, however, there was one other belonging she made sure to bring with her: a book on spinning.

Dennis and Ute moved to his hometown in New Jersey. It was at this time that Mrs. Gil-sa Eu encouraged people to attend UTS. With Mrs. Eu’s approval, Dennis came to UTS in 1989 and Ute followed in early 1990 to work part-time as an administrative secretary to the Executive Vice President, Mr. Edwin Ang.

With a changing of the guard at UTS in 1995 following the retirements of President David S.C. Kim, Dr. Ang and Therese Stewart, Ute became the full-time registrar under the newly appointed president, Dr. Theodore Shimmyo.

As her children grew and family and work life became more settled, Ute was finally able to return to the creative impulse that had first piqued her interest as a young girl. In 2006, she began teaching a Continuing Education course on crocheting in the Red Hook school district. It wasn’t long before this led her into the world of spinning… and beyond.

“I was talking with my students and mentioned I was interested in learning how to spin,” explained Ute, “ and one of my students said, ‘I can help you with that.’”

In reality, her student, Mary Kelly, could do more than just ‘help.’ “She (Mary) is the founder of the Elmendorph Handspinners Guild in Red Hook,” said Ute, “and also one of the founders of the New York State Sheep and Wool Festival.” The name refers to the Revolutionary War-era inn in Red Hook where the Guild first held their meetings.

The festival, which is held every year at the fairgrounds in Rhinebeck, attracts as many as 60,000 people in two days from all over the world.

The other thing Ute discovered about the festival - and county fairs, as well - is that they hold competitions and award ribbons, known as “rosettes,” to the winners. Over the past 15 years, Ute’s entries have garnered her several “Best of Show” prizes.

“My first was at the Ulster County Fair,” said Ute, “and then I won again at the Sheep and Wool Festival in Rhinebeck. There are a lot of different techniques. Each place has different categories, or entries: small items, large items, wool or llama.”

Although Ute still enters competitions, much of her focus now is on teaching, giving demonstrations and volunteering. Ute also donates some of her finished products to charity, which are then sent to places such as Afghanistan.

“I do mini-workshops in the Guild and demonstrations on how to use the inkle loom. I’m also doing a lot of volunteering at historic sites, museums and festivals demonstrating how to spin. I’m always volunteering at the Sheep and Wool Festival and I also work as an announcer in competitions.”

The “announcer” is the spokesperson in each group that explains to the audience what the group is doing, what type of material is being used and the technique being applied to the making of the finished product.

When queried about why she thinks handcrafts have continued in popularity, Ute had a ready response.

“People do it to express their creative urge,” said Ute. A huge group does it for therapeutic reasons. Many young people are taking up the crafts. For a while, it was known as the “new” yoga. They realized it was easier and cheaper to take up knitting than go to a therapist.”

Anyone thinking of utilizing handicrafts as a way to augment their income or do it as a business will be brought up short, however.

“I either make pieces for myself or give them as gifts,” said Ute. “The cost of the material and the time you have to put into it is just too much. For one sweater, it would cost $120 just for the material, and that’s before you even started making it. The money you make is from developing patterns and teaching the craft, not selling the product.”

For anyone interested in getting more information about the people who sell handmade pieces or would like to purchase products to make their own pieces, go to www.etsy.com.