An Interview with Ginger Nicholls (UTS'86), Missionary to Nepal 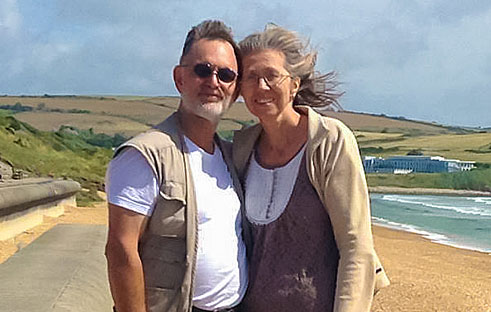 For 15 years, from 1997-2011, Unification Theological Seminary (UTS) graduate, Ginger Nicholls (UTS’86), served as a missionary to the country of Nepal along with her husband, John, and then their daughter, Sophia. She has described their journey in her book, The Kalki Avatar: Tears for Nepal, a 267-page account of the hardships, tragedies and triumphs of life in a country with centuries of history and traditions based almost entirely on the Hindu and Buddhist religions. The three of them now reside in England, John’s homeland.

Working with other missionaries and members of the Family Federation for World Peace and Unification (FFWPU) from Korea, Japan, Thailand, the Philippines and the United States - all with different cultures, traditions and languages - sometimes helped and other times added to the struggle to bring the message and teachings of Rev. Sun Myung and Hak Ja Han Moon, to the isolated country at the top of the world best known as the home of Mount Everest.

Testing both her patience and her faith, Ginger recounts the many struggles she and John faced, and overcame, from external problems like unheated dwellings with electrical and water shortages, to the larger, internal struggles of trying to understand and guide people toward a goal which was often hard to define, and even harder to reach.

There were health issues for both John and Ginger; the rise of communist and Maoist groups; and difficulties in winning the trust of the people and laying a foundation for others - present and future - to follow. Their saving grace, however, was the parallel scriptures from Hindu, Buddhist, Christian and Unification teachings that allowed them to introduce new ideas which pointed the way to a “new world,” while still able to revere and follow the traditions of ancient, honored texts.

It took years for Ginger and John to overcome the distrust of younger FFWPU-Nepal members, who were not always sure of the direction which they were being asked to follow. In the end Ginger and John’s faith and tenacity paid off. Starting with 25 or so core “home members” when they arrived, the Nepal FFWPU now operates 32 centers, with 160 full-time members and 300 core Blessed families, including Ek Nath Dhakal, currently the Universal Peace Federation Nepal (UPF) president who also represents the approximately 100,000 Nepal Family Party members in the national government.

I put some questions to Ginger about her time in Nepal and what she, John and Sophia are doing now.

1. You write in your book the struggles you had with your and John’s health problems. How are the two of you doing today?

John had an angioplasty (stent placed into an artery leading to the heart) in 2014 and is waiting for an appointment to review the stent and possibly put in several more. In addition, he is trying to control Type-2 diabetes through diet and exercise. I continue to deal with osteoarthritis. At times we both think we are still in our 30s!

2. You write about the many struggles you had with students and young FFWPU members. What do you consider the greatest victory for John and you during this time?

Yes, I wrote about in my book about the challenge of loving someone who is more difficult to love because of the pain and resentment they carry. This is often rooted in their own family life. Our challenge was to digest their accusations and threatening behavior, and answer with unconditional love and take responsibility. We witnessed and experienced first-hand how such a person could be completely melted by the power of true love. On that foundation came the launch of the first 40-day Mobile Fundraising Team (MFT) in Nepal, its success, and the subsequent MFT work.

3. You were in a foreign country with other foreigners including Japanese, Korean, and Filipino members. Other than language, what was the most difficult hurdle you had to overcome?

It was to feel accepted and valued by Korean elders. It seemed easier for them to relate to young Asian members from a parental, vertical position than to western members who were closer in age, and desired to be treated/loved as brothers and sisters. The challenge to overcome that hurdle, however, brought us on a deeper course of “restoration and blessing”. John didn't have a university degree and the structured teaching ability which some expected from a UK citizen assigned to a leadership position. He was able to channel spiritual truth and guidance from his experience with writing music and singing. He was fortunate to offer a public performance of "Tears In Heaven" at a banquet with Dr. Yeon Ah Nim Moon.

4. You write about the difficulty of reaching Nepalese students who - “were surrounded by layers of ancestors who represent ancient cultures, traditions and ways of thinking.” How long did it take you to break through these “layers”?

A good number of years! The rituals/observances of Hindu (FFWPU) members seem to be inborn and never discarded. Nepalese are very loving in their relationships with family and friends, so it is easy to win their heart and they return more than they are given. However, without a Judeo-Christian footing or without exposure to stories of the Old and New Testament, including Jesus' parables, their understanding of spiritual principles seems underdeveloped unless they have pursued study of the later Hindu scriptures such as The Bhagavad Gita or writings from more recent and modern Hindu yogis. By underdeveloped, I mean their understanding could be likened to the Old Testament Age, when human beings related to God by making offerings of grain, fruits or animals and obediently followed many rituals. Similar rituals originated in the earliest of Hindu scriptures, such as the Vedas, which were written between 1500-1000 BC.

5. What did you learn from the Buddhist and Hindu religions that have stayed with you?

What has really stayed with both John and me are the memories of experiencing Buddhism and Hinduism in daily life: the sounds of a horn and the tinkle of bells outside our window as Nepalese women prepare for their morning prayers; the sound of Buddhist drums and chants just behind our home; the beautiful meditation music playing on the streets of the shopping district, with incense burning to delight your senses; walking past small Hindu temples on every street with tikka powder freshly put on statues daily; Buddhists walking along doing their morning prayer walk holding their beads like catholic rosaries silently mouthing “om mani padme hum”; walking past Buddhist stupas and taking a minute to roll the wheels of prayer with outstretched hands; taxi drivers and pedestrians making the sign of the "horizontal cross" every time passing a temple; a walk at the Bagmati River where a diseased body is being prepared for burning or already complete, leaving nothing but smoking ashes; so much is ingrained in everyday life, one is reminded of the spiritual realm at every turn; seeing the cows lying down in the middle of a busy intersection… the sacred cow....why is it sacred? Because it gives life sustaining milk to all… like the Divine Mother of Creation and the reason to worship your Mother as a goddess!

6. You and John overcame many difficulties with prayer and patience. Do you see in yourself today the benefit of having faced and overcome these challenges?

Absolutely; even more so within our daughter in her attitude toward overcoming challenges in life. Of course we grew and matured in some ways through those difficulties, however, there are so many layers to fallen nature that we can see how it takes more than one generation to fully realize one's true nature. We both gained substantial confidence in ourselves through our mission years, as well as a deeper faith and sensitivity to others. We came away feeling triumphant and grateful that we were given the chance to do something valuable with our lives; no matter what we gave up physically, we gained an eternal treasure.

7. Do you plan to do a speaking tour to promote your book in Europe and/or the U.S.?

We are certainly open to it but God has to provide the way.

8. How old is Sophia now? What is she doing? What does she miss most when she thinks about her time in Nepal?

Sophia is 14-years-old, in year nine in secondary school and she does well academically. She loves dance, which she began by studying Indian dance in London for a short time when she was three, and then learned some Nepalese dance while in Nepal. She choreographs her own dances, contemporary and sometimes mixing East and West, and is a member of WAIT-UK. She misses her FFWPU childhood friends in Nepal the most, and the close community life of aunties and uncles that we shared. The link shows Sophia performing a Nepalese dance.

9. Are you planning to return to Nepal anytime soon?

Unfortunately, at the time we had finally saved the finances to go, John and I were both made redundant from part-time live-in jobs at an FFWPU facility last December. We had to look for a new home, new jobs and change schools so it was an unsettling time. I used the opportunity to finish my book to anchor myself while John found agency work. We tried to book tickets in the summer but couldn't process the online payment; the next day prices had risen substantially. We would like to go during the summer holidays with some WAIT members, but it’s difficult to say now; depends on our job and health status.