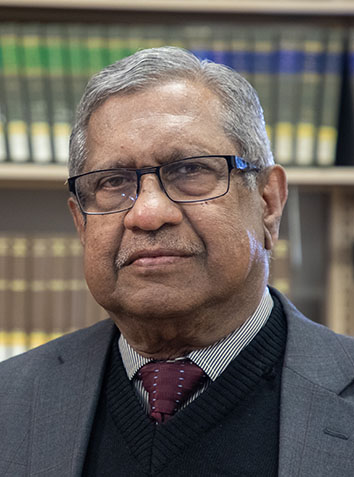 The Rev. Dr. Jacob David is St. David's, Cranbury Priest Associate. He and his wife, Shanta, moved to Dayton, NJ after retiring from the Diocese of Newark in 2011. They became members of St. David's Episcopal Church in 2012. Before joining St. David's, he held the position of Rector of Episcopal church of St. Paul's and Resurrection, Wood-Ridge, NJ for 28 years.

Fr. Jacob was ordained a Deacon in 1984 and to the Priesthood in 1985 for the Diocese of Newark. He served at the Church of the Resurrection in East Rutherford, NJ as Vicar from 1985-2000 and later on became Rector of St. Paul’s and Resurrection Church in Wood-Ridge, NJ. In 1998 he received “the Priest of the Year award” (Canterbury Scholar Award) from the diocese of Newark and was sent to Canterbury, England for studies in Anglicanism.

Father Jacob has been teaching at Unification Theological Seminary, NYC as an adjunct professor until 2006. He was later appointed the Director of Field Studies and the Assistant Professor of Ministerial Studies and Homiletics.

Shanta, Father David's wife, is a Professor of English at Union County College in Elizabeth, NJ. Their two daughters, Anjana and Namita, are married with children. Anjana is a social worker in Baltimore and Namita is an administrator for Princeton Review, living in NJ.